The former leader of the free world just added one more accolade to his resume: Father of the Year. 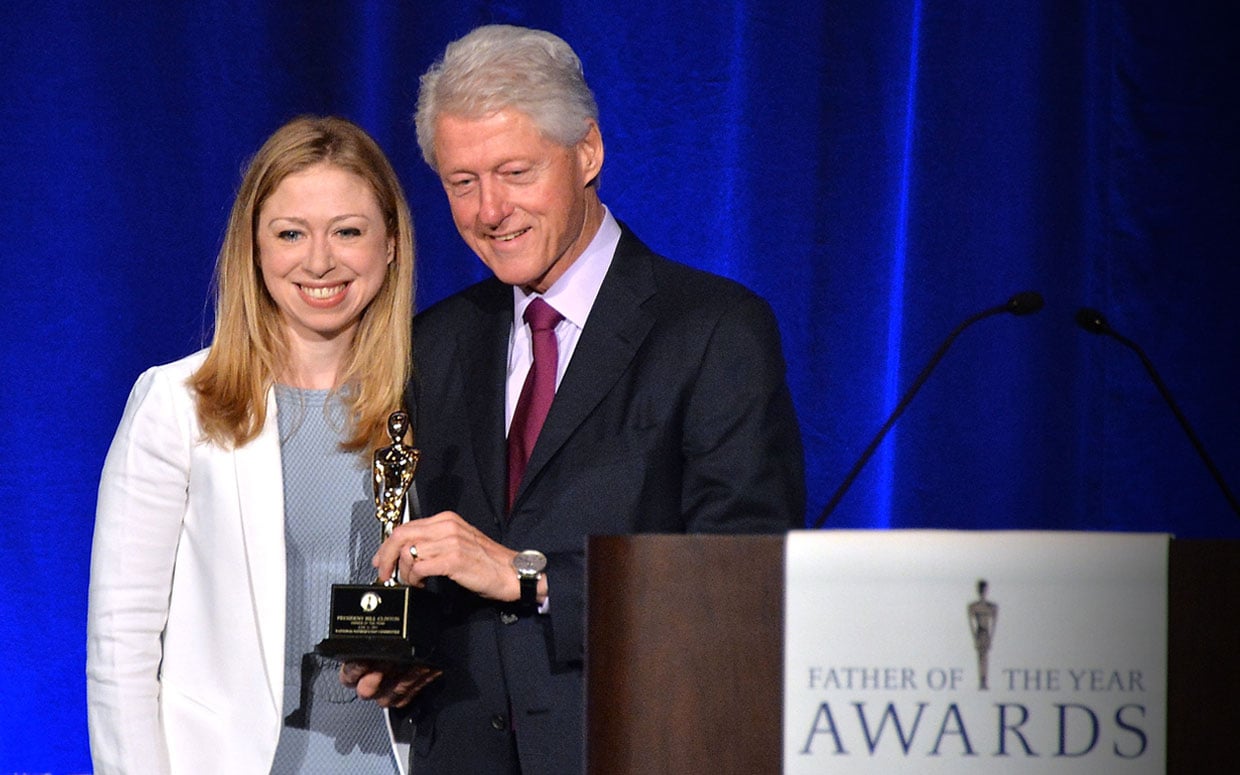 The National Father’s Day Committee awarded Bill Clinton, 66, with the title at a New York City luncheon benefiting Save the Children Tuesday. “I [received] a text message from Hillary [Clinton] saying, ‘Congratulations. I think you deserve this.’ In our family, that’s a very big deal,” he said as he accepted the honor, which has been awarded by the National Father’s Day Committee annually since 1942.

Chelsea Clinton made a surprise appearance at the event to present the award to her father. “Every day he’s my dad, and I don’t need an award to tell me he’s the best that I ever could have hoped for,” she said. “But I’m grateful he’s getting the recognition that I, of course, his unapologetically biased daughter, think he’s always deserved.”

The former commander-in-chief added that, despite the many positions he’s held in his lifetime, his role as a father has always come first. “During the sole argument we had when [Chelsea] was in high school, the subject of which I don’t even remember, I looked at her and said, ‘As long as you’re in this house, being president is my second most important job,’” he said.

In his acceptance speech, Clinton also recounted a touching story about Chelsea’s birthday in 1980. “On the night she was born, I came home from Washington, D.C., from a governors’ conference. And Hillary’s water broke 15 minutes later,” he said. Upon arriving at the hospital, the Clintons were told that the baby was in a breech position and would have to be delivered via Cesarean section—and that fathers weren’t allowed in the operating room, he said.

The former president, who was the governor of Arkansas at the time, said he protested to the hospital staff. “If you send her into that room without me, I think you’re making a big mistake … I want to see my daughter born,” he recounted saying. Eventually, the doctors relented, he said. “They let me go in and hold Hillary’s hand. I saw Chelsea come out, and it changed the hospital’s policy on letting fathers into the delivery room when surgery was required. And from that day to this, I have believed without the shadow of a doubt that it was the greatest thing that ever happened to me.”

Clinton concluded by saying that there are “a million people who are equally or more deserving” than he is of the “Father of the Year” honor. “But you could never have picked anyone happier [for the award], because seeing my daughter still makes me happier than anything else in the world,” he added.

Chelsea, 33, was equally sentimental while presenting the honor to her dad. “Of all reasons that I’m proud of my father, I’m most proud that he’s my dad and that he’s always been there for me. And he’s set the bar very high for my husband, as Marc [Mezvinsky] and I think about having our own children,” she said. “He has always provided me a safe place to land and a hard place from which to launch.”

The former first daughter recently opened up to Parade about her affectionate relationship with her family. “I’m incredibly close to both my parents individually and collectively,” she said in April. And although she says she and Mezvinsky are busy “working very hard,” she “absolutely” hopes to have children of her own someday. “I certainly share my mother’s hopes that at some point, she will be able to take our children around the world,” she said.

Also honored as outstanding dads at Tuesday’s event were Terry J. Lundgren, CEO of Macy’s, and Major Jackson Drumgoole of the Army. Past honorees include Ronald Reagan in 1957, Dick Van Dyke in 1967, Al Gore in 1984, and Randy Jackson in 2008.

Growing up under the eyes of a caring dad can be the greatest gift anyone can cherish. Your dad is someone who can stand as a symbol of inspiration for your entire life. It is your father from whom many draw their strength from. He can be the strongest pillar in your life. Expressing “Happy […]

On June 21 this year, we’ll all be saying a little ‘thank you’ to the men who raised us, as well as to the men who have helped to raise our children. If you’re looking for the right words to celebrate your husband this Father’s Day, check out these quotes for some inspiration. From sappy […]

20 Father’s Day Memes To Celebrate How Cool Dads Are

Dads are simply awesome. They aren’t afraid of pushing their kids to the limit and encouraging them to be the best they can be. They are great coaches and fierce protectors. Your dad will make sure nobody picks on you while you’re having fun in the playground and he’ll make sure you get to enjoy […]