John Wayne Quotes: John Wayne was an American film actor, director, and producer. He starred in 142 pictures and won an academy award.

John Wayne was among the top box office draws for three decades. He is an American icon and epitomized rugged masculinity especially in his western films.

1. “Courage is being scared to death… and saddling up anyway.” – John Wayne

2. “Tomorrow is the most important thing in life. Comes into us at midnight very clean. It’s perfect when it arrives and it puts itself in our hands. It hopes we’ve learned something from yesterday.” – John Wayne

4. “All battles are fought by scared men who’d rather be some place else.” – John Wayne

5. “I won’t be wronged. I won’t be insulted. I won’t be laid a hand on. I don’t do these things to other people and I require the same from them.” – John Wayne

6. “I have tried to live my life so that my family would love me and my friends respect me. The others can do whatever the hell they please.” – John Wayne

10. “I define manhood simply: men should be tough, fair, and courageous, never petty, never looking for a fight, but never backing down from one either.” – John Wayne

11. “I’m responsible only for what I say, not what you understand.” – John Wayne

13. “When you come against trouble, it’s never half as bad if you face up to it.” – John Wayne

14. “I’d like to know why the well-educated idiots keep apologizing for lazing and complaining people who think the world owes them a living.” – John Wayne

16. “Tomorrow hopes we have learned something from yesterday.” – John Wayne

18. “Everybody that I was in school with had an uncle or father in the law, and I started to realize that I was going to end up writing briefs for about ten years for these fellows who I thought I was smarter than. And I was kind of losing my feeling for that.” – John Wayne

19. “The worst part of it has been, I think, the adverse effect on family life. It kills off family conversation. And it’s harder to get your children to read books. I became a confirmed reader when I was growing up in Glendale. I’ve loved reading all my life. Now I’ve got this daughter, Aissa, a very bright young lady — but it is a hard job to get her to read. Television’s just too easy.” ― John Wayne

20. “I’m not the sort to back away from a fight. I don’t believe in shrinking from anything. It’s not my speed; I’m a guy who meets adversities head on.” – John Wayne 21. “I suppose my best attribute, if you want to call it that, is sincerity. I can sell sincerity because that’s the way I am.” – John Wayne

23. “Real art is basic emotion. If a scene is handled with simplicity – and I don’t mean simple – it’ll be good, and the public will know it.” – John Wayne

26. “In westerns, you meet a hardy bunch of characters. There is no jealousy on such pictures.” – John Wayne

27. “I’d read up on the history of our country and I’d become fascinated with the story of the Alamo. To me it represented the fight for freedom, not just in America, but in all countries.” – John Wayne

29. “I never have really become accustomed to the ‘John.’ Nobody ever really calls me John… I’ve always been Duke or Marion or John Wayne. It’s a name that goes well together, and it’s like one word – John Wayne.” – John Wayne 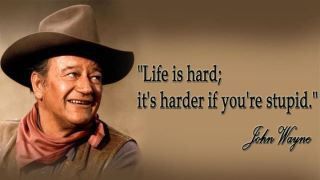 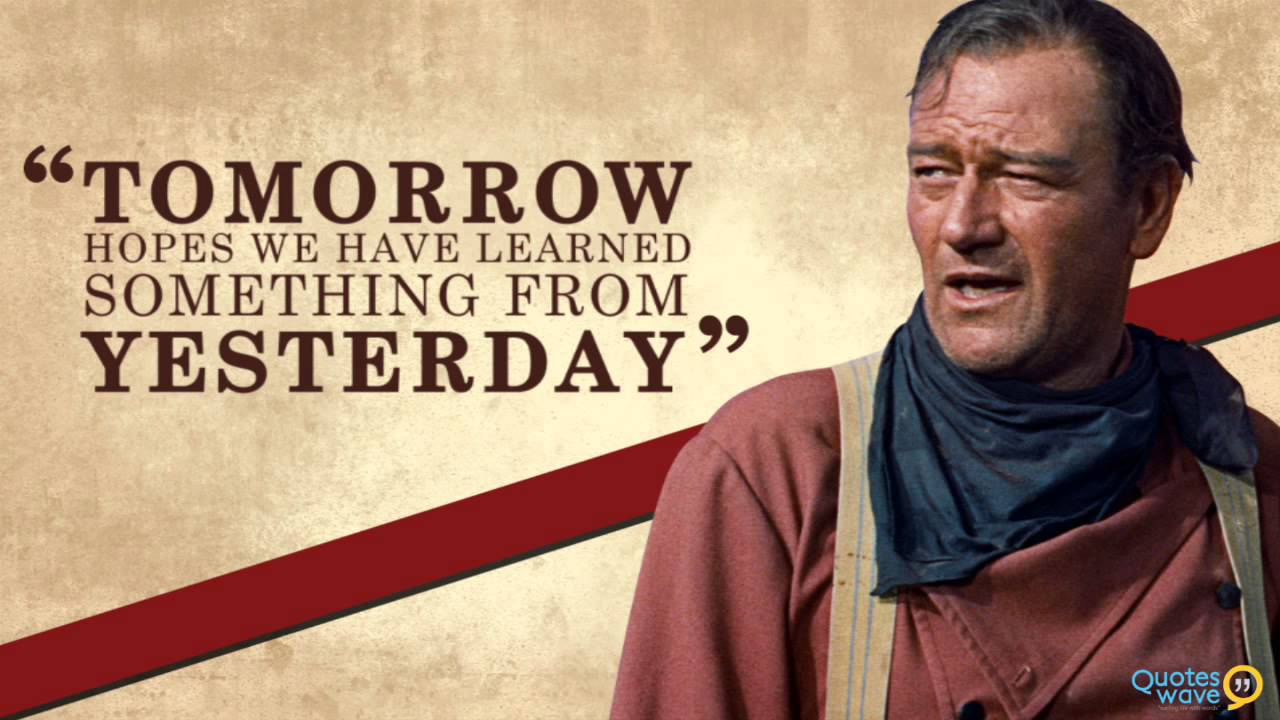 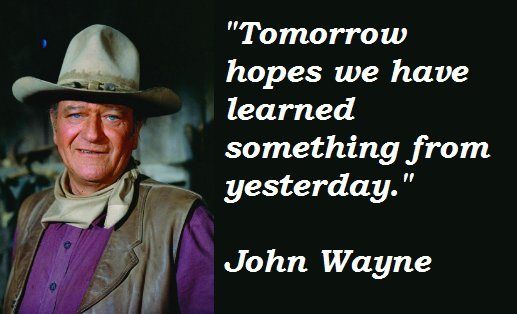 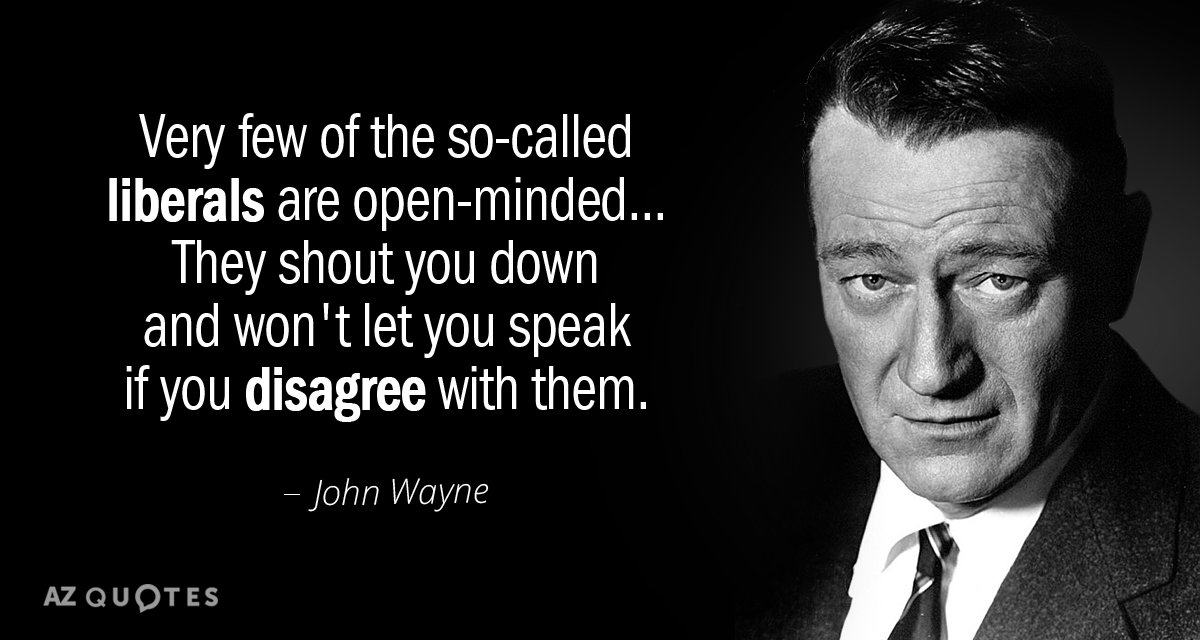 – “All the screen cowboys behaved like real gentlemen. They didn’t drink, they didn’t smoke. When they knocked the bad guy down, they always stood with their fists up, waiting for the heavy to get back on his feet. I decided I was going to drag the bad guy to his feet and keep hitting him.” – John Wayne

31. “Nothing is so discouraging to an actor than to have to work for long hours upon hours in brightly lighted interior sets.” – John Wayne

32. “I was ashamed to admit I was hipped to the idea of acting. That’s why I started in with the props.” – John Wayne

33. “Nobody should come to the movies unless he believes in heroes.” – John Wayne

34. “In my acting, I have to identify with something in the character. The big tough boy on the side of right — that’s me.” – John Wayne

37. “I’ve always followed my father’s advice: he told me, first to always keep my word and, second, to never insult anybody unintentionally. If I insult you, you can be goddamn sure I intend to. And, third, he told me not to go around looking for trouble. ” ― John Wayne

39. “A goal, a love and a dream give you total control over your body and your life.” ― John Wayne

40. “I would like to be remembered, well … the Mexicans have a phrase, “Feo fuerte y formal”. Which means he was ugly, strong and had dignity.” ― John Wayne

It is a beautiful feeling to be loved by someone you also care for. Expressing your love is extremely important. In our hectic schedules, we must not forget special occasions that come into the life of each other. We must try to rejoice those events, as celebrations should not be dependent on reasons. In this […]

Dreams have been part of our human life. We dream as we sleep, dream as we walk and dream as we rest. Most of us believe that dreams occur for a reason and dreams do come true. Moreover, we believed that dreams are magical and powerful. To protect our dreams from bad ones and catch […]

It is a beautiful feeling to be loved by someone you also care for. Expressing your love is extremely important. In our hectic schedules, we must not forget special occasions that come into the life of each other. We must try to rejoice those events, as celebrations should not be dependent on reasons. In this […]