John Mulaney Quotes: Sometimes you just need to sit down and see some things that are funny. And when you think about it, what better funnies are there than a stand-up comedian with so much notoriety his reappearance on Saturday Night Life made some ripples. But perhaps nothing John Mulaney has ever done has been so surreal as the time he dragged Jake Gyllenhaal into the weirdest musical bit ever. Need a few more laughs? Check out these John Mulaney quotes.

This is going to sound bad, but it takes a lot for me to laugh out loud. Sure, I will chuckle at jokes and find things funny, but to make me belly laugh is a whole different story. I have never found comedians to be that funny and never thought I would. But then John Mulaney was introduced to me, and let me tell you, he is hilarious. Everything that comes out of his mouth is quotable and I use his jokes to respond to people every day without fail. Here are only some of his hilarious quotes and jokes.

No really, that musical clip was an absolutely wild ride and we’re still not entirely sure how to feel about it.

It’s not healthy but you know… Affording mental healthcare is hard, okay?

3. “It is 100% easier not to do things than to do them, and so much fun not to do them–especially when you were supposed to do them. In terms of… like… instant relief, canceling plans is like heroin.”

You ever ask an adult what they did over the weekend and they say they did nothing? Their faces light up.

4. “I never knew you were supposed to push off of your feet when you walked. And I tried it, and I walked much faster.”

We were always told to learn something new every day. But new ways to walk as a functioning adult is probably something most people didn’t want to put on there.

5. “If you’re comparing the badness of two words, and you won’t even say one of them? That’s the worse word.”

You can probably personally think of a lot of times you’d like to have used this as a comeback.

6. “It seems like everyone, everywhere, is super mad about everything, all the time.”

7. “Sometimes people would say “what do you think you’re doing?” But that just meant “stop.””

Well he was going to put a bottle rocket into a carton of eggs so they would explode everywhere.

Well it is a good way to actually see who is or is not in your contacts we guess.

10. “When I walk down the street I need everybody, all day long, to like me so much. It’s exhausting.”

That’s probably why he needed Xanax.

11. “You have an imagination, you have a movie theater in your mind that plays arguments! That you win!”

We spend too much time thinking about all the comebacks we could have had that definitely would not have won the argument anyway.

12. “I’ve been zoned out since 2014. I just–all day long–I wander into traffic. Walking like Charlie Chaplain while listening to a podcast while thinking about a different podcast.”

Honestly, we’ve probably been doing this since before 2014.

Well they wouldn’t call it making fun of people if it was never fun, right?

15. “8th graders will make fun of you, but in an accurate way. They will get to the thing that you don’t like about you.”

16. “I don’t look like someone who used to do anything. I look like I was just sitting in a room with a chair eating saltines for 28 years and then walked right out here.”

Being called “cosmically uninteresting” is probably one of the hardest, clean insults we can think of at the moment.

You might say he gave his college $120,000 and they had the audacity to ask him for more money.

What even is college anyway?

18. “And now there’s new Nazis! I don’t care for these new Nazis and you may quote me on that.”

It might not be the worst thing. A horse is a very stable animal. Right?

1. “You have the moral backbone of a chocolate éclair.”

His Bill Clinton bit is one of the highlights of his show, “The Comeback Kid,” and I would highly recommend watching it. All in all, John as a kid comes home and he tells his father, “I’m gonna be a Democrat and I’m voting for Bill Clinton.” His dad responds with, “You have the moral backbone of a chocolate éclair.”

2. “Anyone who’s seen my d*** and met my parents needs to die; I can’t have them roaming around.”

After talking about how he got cheated on, Mulaney goes on to explain how it’s creepy to have an ex out there who knows so much information about you after things have ended. I died laughing when he said the above quote. 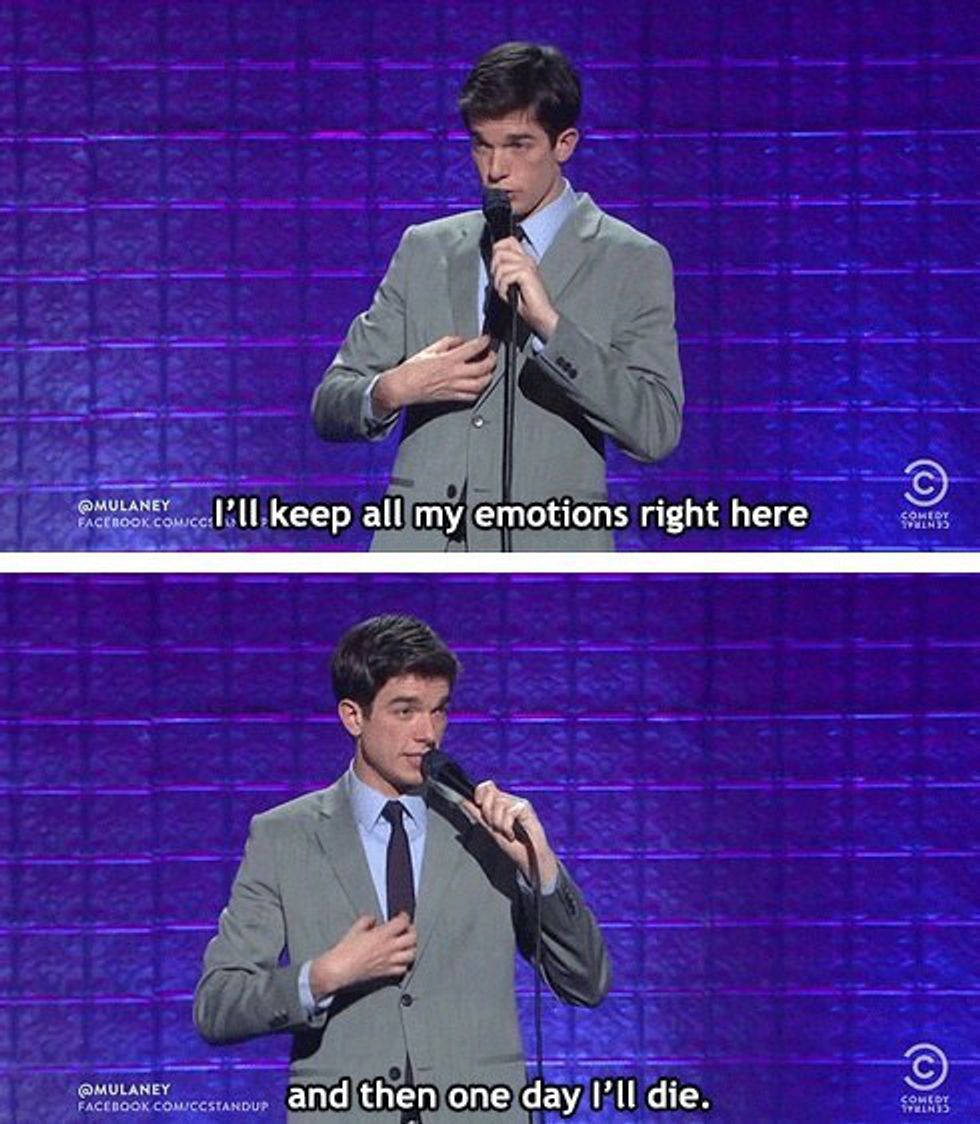 I can’t even choose one quote from this sketch because the entire bit is hilarious. Mulaney goes on to talk about how the plot of “Back to the Future” must have originally been pitched and in reality how weird the plot is when you actually explain it. It’s legendary.

5. On the phone with Blockbuster. 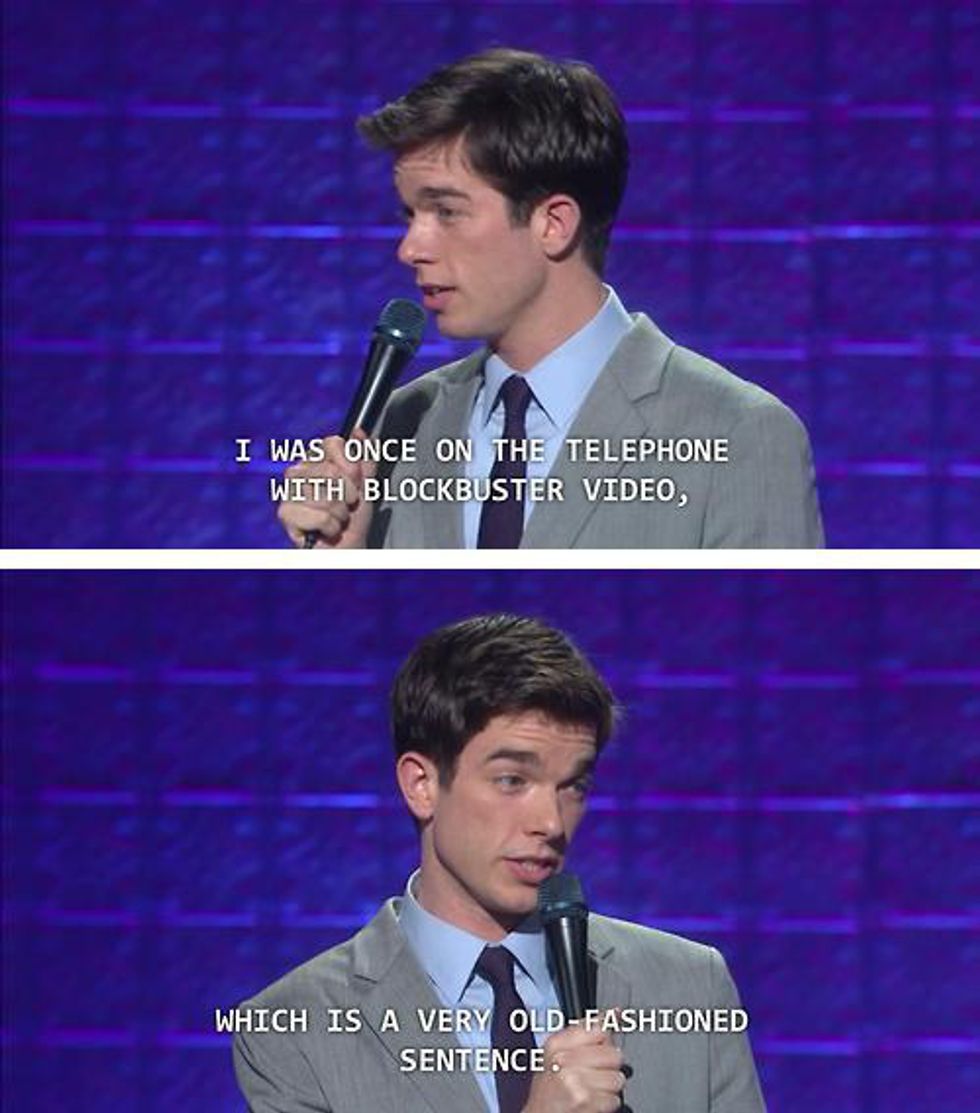 This is the punchline of the Bill Clinton sketch, essentially, so just watch it — I promise you it is well worth it. 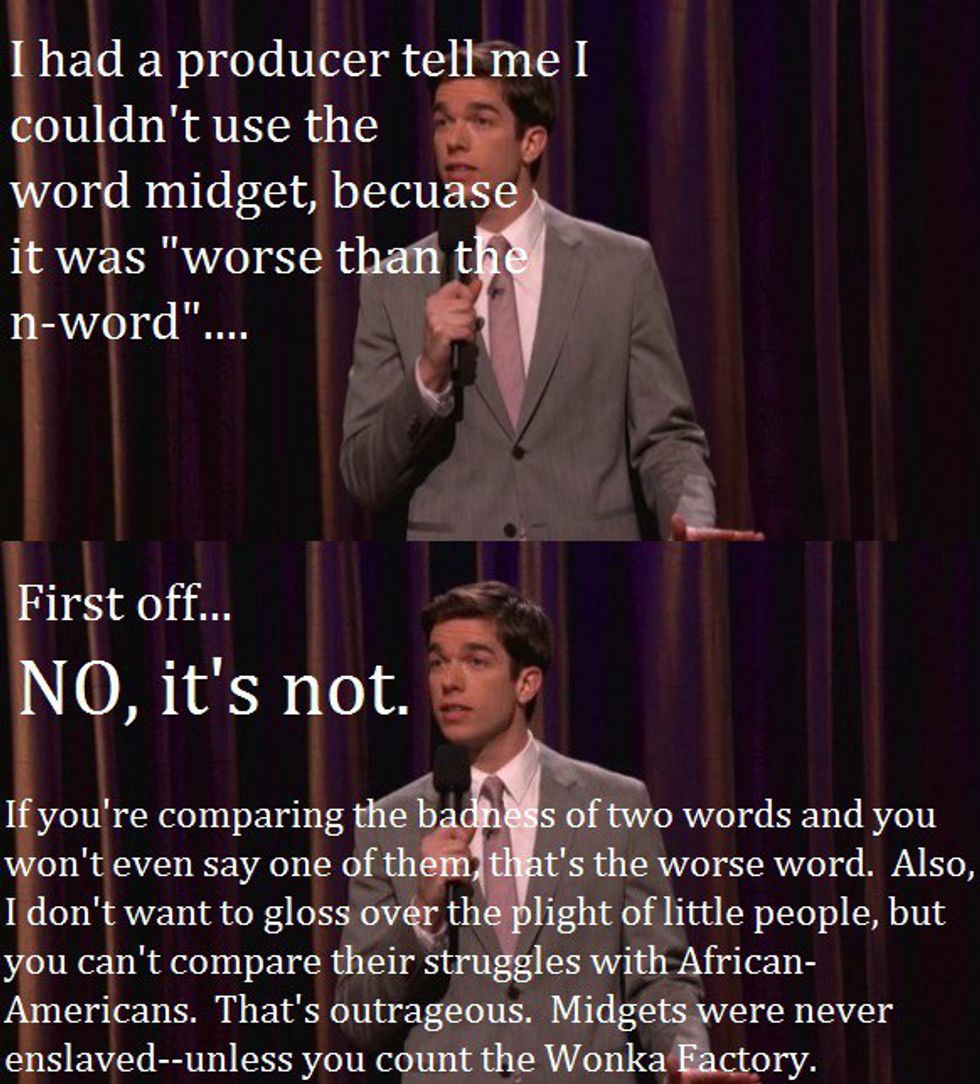 As a kid, anytime you saw a McDonald’s your parents had to stop. But instead, John Mulaney’s father wasn’t having it and decided to do one of the coolest and funniest things.

Yes, Bill Clinton sketch again. But, what’s great is how Mulaney ties previous jokes into other sketches. So when Mulaney’s mom got an invitation to a fundraiser where you could meet Bill Clinton, and having told a story about how his mother knew Bill Clinton in college, she said, “We have to go see Bill!” Mulaney’s father then replied with, “Why? It’s not like he’s gonna remember you.” And after a half gasp, half laugh from the audience, Mulaney goes, “One black coffee… same motherf***er.” Hilarious. 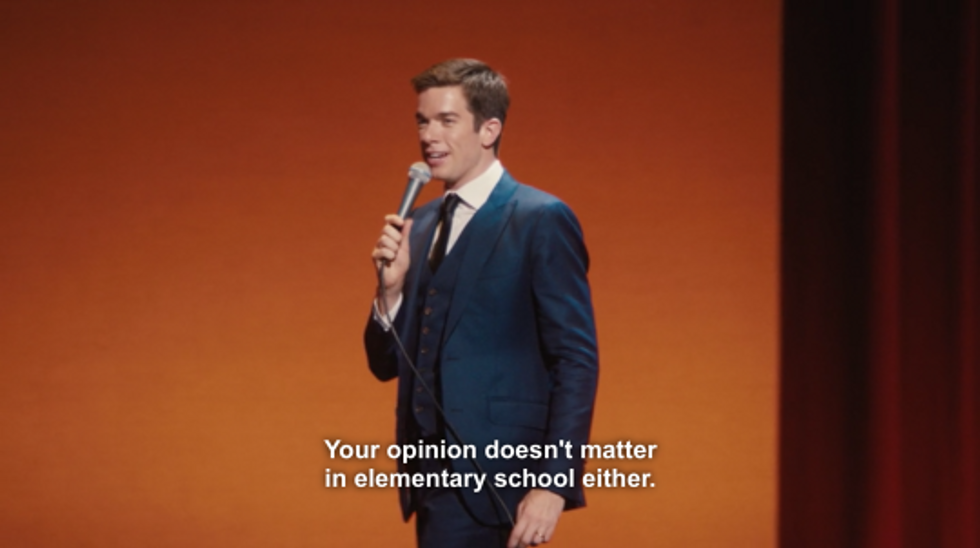 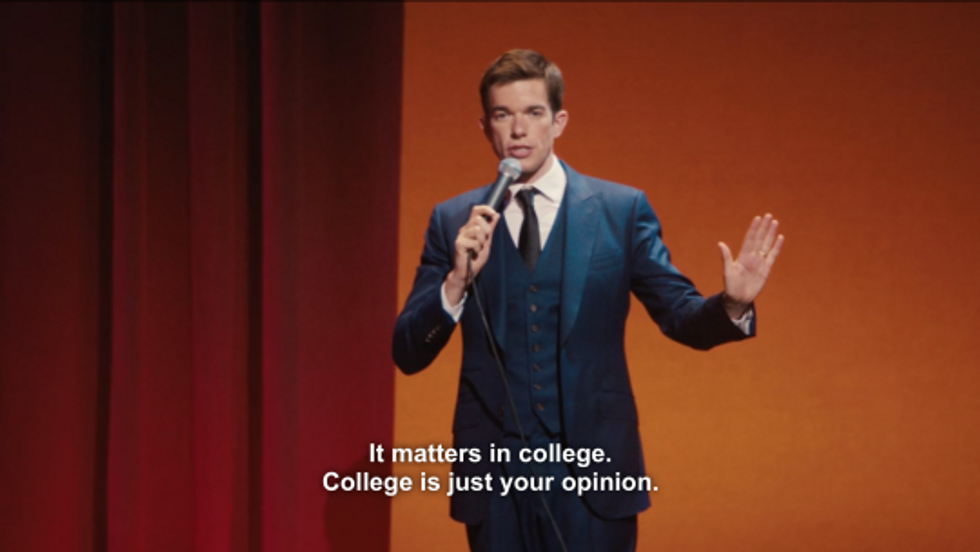 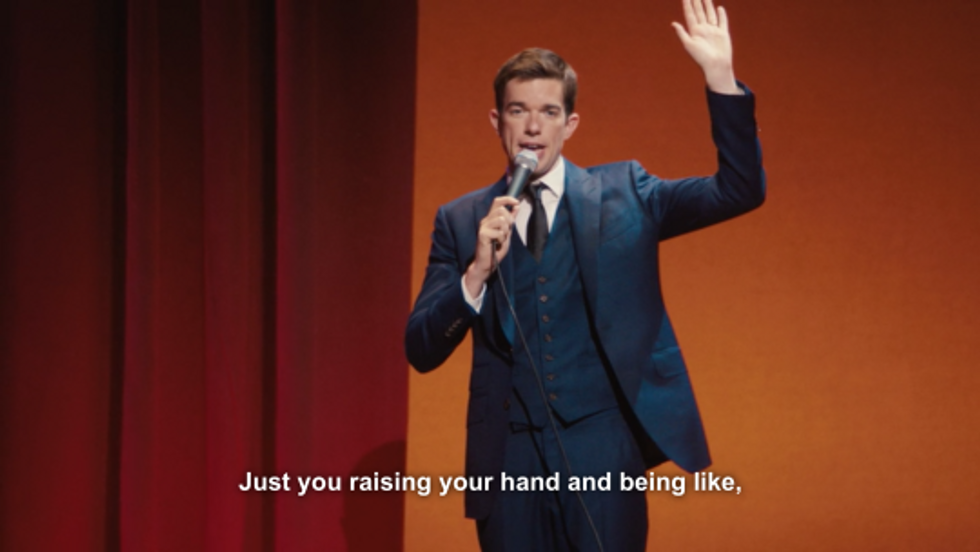 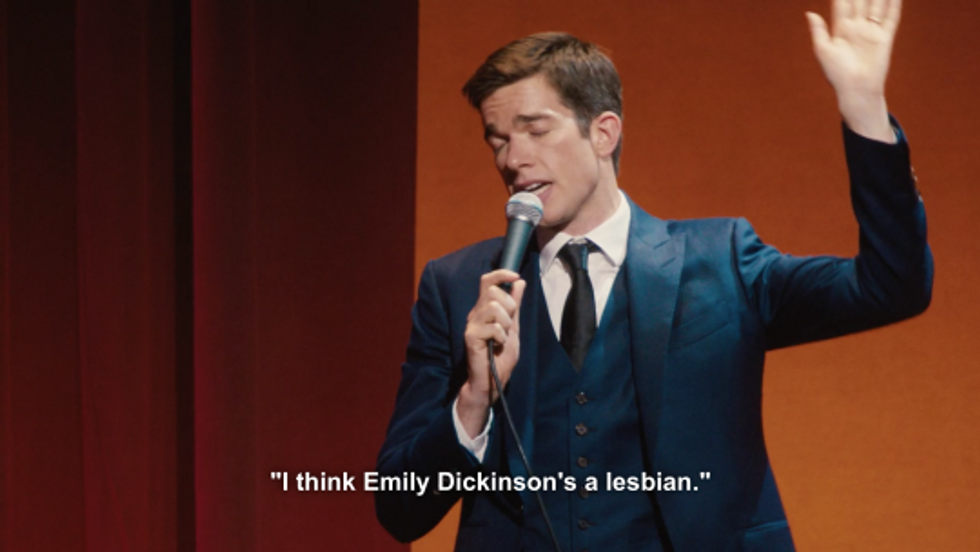 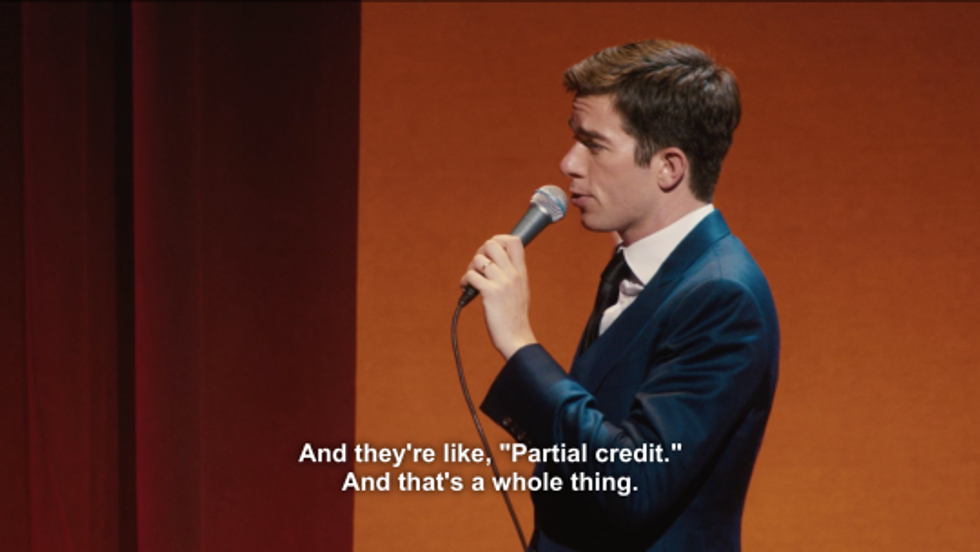 Now, his last one may not seem funny at all as a quote, but the story Mulaney tells to set up this punchline is the greatest. If you already read the joke above, you know that Mulaney was talking about a party he went to in high school. The ending of the story was that the kid hosting the party said that someone at his party stole old antique photos of his grandmother. Two years later Mulaney’s friend shows him a closet in his house filled wall to wall with old antique photos. So Mulaney goes, “Why?…Why do you do this…?” and his friend responds with, “Because it’s the one thing you can’t replace.” And that, my friends, is quite a great story. Mulaney never fails to make me die on the floor laughing.