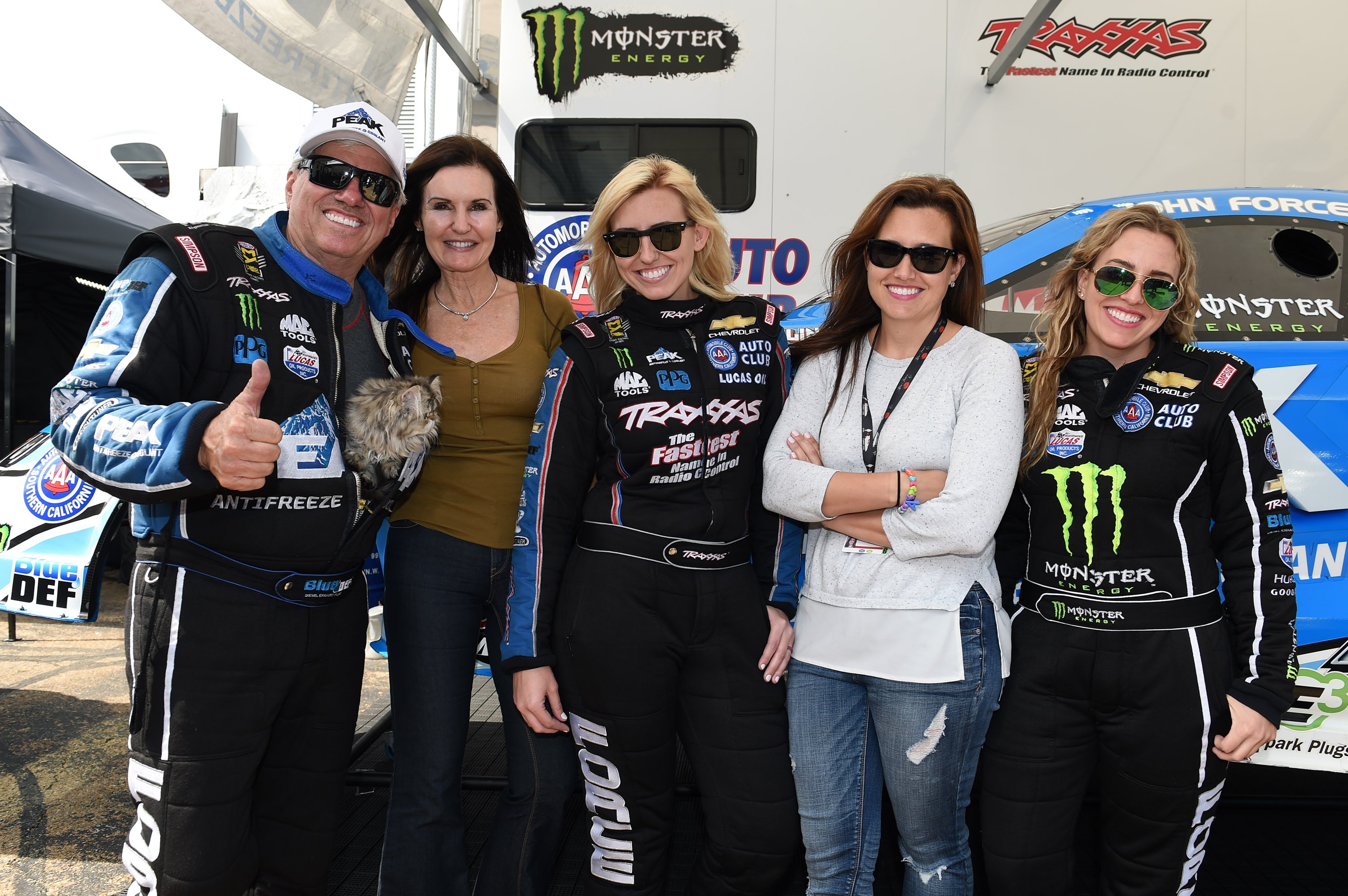 Most fathers can’t brag that all of their kids are in the family business, but John Force isn’t your typical dad. The drag racing superstar, 16-time NHRA World Champion, and man behind John Force Racing, has three fast-paced award-winning daughters with a need for speed. Once the woman behind an 8,000 horsepower Ford Funny Car, daughter Ashley Force Hood, no longer on the track, serves as President of John Force Entertainment and the force behind video production at John Force Racing. Daughters Brittany and Courtney continue to be the female record-setters in the family and will be busy racing for the trophies this summer. I caught up with the three sisters to find out their Father’s Day plans and some John Force facts you probably didn’t know.

What is one of your favorite childhood memories of your dad?

Courtney: My favorite childhood memory with my dad would probably be my seventh birthday where I got to go with my dad to his race in Richmond, Virginia, by myself. I got to hang out—just me and dad all weekend long, go to his media appearances, sign autographs with him at the ropes and hang out in the pits with his crew. It was so exciting for me to be spending my birthday with my dad who lived his life on the road and being able to share that time with him. Even better, he got the win at the end of the weekend, so we got to celebrate in the winner’s circle!

Brittany: Some of my favorite memories are of my dad being a complete goofball! He would spend weeks on the road, so our time with him was always quick and limited. When he did come home, it was always Disneyland at the house. My dad would allow us to dump the homework and play hooky from school. He would take us for waffles in the morning and then spend the day with me and my sisters. He also enjoyed making his girls tough. He believes you should always fight through fear and overcome it. If you’re afraid of something, attack it! Fear only holds you back.

I also remember a night he brought home Nerf guns at 10 o’clock at night. He woke us all up, gave us each a gun and a flashlight, turned out all the lights in the house and it was game on! My mom was also running around the house yelling at my dad that it was a school night and someone was going to hurt. That night began in laughs, but ended in tears. I fell down in the dark and Court shot me in the face. Moms are usually always right, but I do thank my dad for the continuous lessons over the years on overcoming your fears. Jumping into an A Fuel dragster and a Top Fuel dragster for the first time, I was unsure if I could handle the car. I wanted to get a license but when the time came down to it, I was absolutely terrified. He pushed me to give it one shot, before saying that I was scared of something. When I crashed in a Super Comp car he pushed me to climb back in the next day and make a run. He said the fear would put up a wall and I would never get back into a race car if I waited till the next weekend. I took his advice and made a run the next day and now I compete in a Top Fuel dragster on the NHRA circuit. His lessons on fear always scared me to death, but deep down I knew he was right. I have to thank him for those lessons because I believe in racing there’s a lot you must mentally overcome.

Ashley: I have many funny memories of my father, but the one that immediately came to mind was when I was about 12 years old and had left Chevy’s Mexican restaurant after a birthday dinner (where they had done singing and given us a sombrero.) On the way home, dad jumped out of the car at the red light, put on the hat and ran around the car. Of course the light changed when he was about half way around, so he made quite a scene as people were honking. I pass through that same intersection on my way to work every day and I always think of this memory and laugh. [Writer’s note: Do not imitate John Force on the road or at stop lights.]

How will you celebrate your dad this Father’s Day?

Courtney: We will celebrate Father’s Day at the races in Bristol, Tennessee, this year and will probably take him out to dinner after the race, hopefully celebrating a win!

Brittany: We usually do something pretty simple with the family and grandkids. We’ve learned our lesson over the years. My dad hates surprises more than anything because the anticipation completely stresses him out. “Are we going on a boat? Do I need swim trunks? I hate feeling trapped on a boat? Are you taking me to a movie? Because I’ve already seen everything in the theaters. Are there other people joining us? I’m really just not in the mood to entertain tonight.” He likes to be in the loop and involved, if not completely in charge of everything.

Ashley Force Hood: This year our teams will be in Bristol, Tennessee, for the race. My two little boys and I are not going to that event, so we will have to celebrate (maybe take him to a movie) when he gets home after the race. I also ordered him this funny shirt- “Papa…the Man, the Myth, the Legend”, that is perfect for him.

Over the years, has there been a lot of racing-inspired gift buying for your dad, or do you steer away from that? What’s one of the silliest gifts you ever gave him?

Courtney: We usually steer away from racing gifts and usually make him CDs, get him Tommy Bahama shirts, or give him cards promising a family trip to the movies since that’s his favorite thing to do. However, the silliest gift I ever gave him was a hot dog toaster. He always tries to make hot dogs at home for dinner since my mom isn’t big on cooking, and I found a vintage Coca-Cola hot dog toaster which he ended up loving and using the next day! Normally any gift we buy him he returns, so I felt so proud I found dad a gift that he actually used and didn’t hide in a closet or re-gift!

Brittany: We gave him a cartoon statue that bent over, and blew bubbles out of its rear end like it was passing gas. My sisters and I thought it was hilarious! He tossed it and was ashamed we could find humor in such a disgusting item.

Ashley: Last year my little boys Jacob (4) and Noah (2) got him a trophy that says “Best Papa Ever”. I’d like to think it’s one of his favorite trophies!

Most dads are big teddy bears when it comes right down to it. Check out these movies featuring awesome dads to watch with your own pop on Father’s Day! Finding Nemo This is one of those cartoons that’s sure to make you cry—in the first five minutes! Once you make it past the scene where […]

For every kind of dad, there’s a perfect Father’s Day activity to enjoy and remember forever. From golf to go karts, find fun Father’s Day ideas here. Go fishing Fishing is one of the most classic father’s day activities for a reason. When else do you get to stand side by side and catch up […]