Infections in the Gulf region passed 2,600 on Thursday, as Saudi Arabia’s cases passed 1,000.

The United Arab Emirates has imposed overnight curfews to allow for a nationwide disinfection to combat the coronavirus as cases in the Gulf region have risen to over 2,600.

Only essential service workers would be allowed out and violators will face fines, a security forces spokesman said in a press conference on Thursday. Public transport including trams and metro services will be suspended, while private cars, cabs and delivery vehicles can operate outside those hours, according to the official.

On Wednesday, Dubai directed the private sector to implement remote working for most staff, but exempted a broad spectrum of businesses. The next day, the UAE government ordered all federal ministries and establishments and the private sector to limit the number of staff in offices to 30 percent, exempting sectors providing what the government considers to be essential services.

Virus spreads in the Gulf

On Thursday, the number of coronavirus cases in Saudi Arabia passed 1,000 with 112 new infections reported, most of them in the capital Riyadh and the holy city of Mecca.

They also reported a third death from the virus, a resident in Medina who had suffered from chronic diseases.

Kuwait, Bahrain and Qatar also saw more cases, taking the total in the six Gulf states to over 2,600, with nine deaths.

Among the countries, Kuwait and Saudi Arabia have taken the most drastic steps, including imposing partial nationwide curfews and suspending work at most public and private sector establishments.

Kuwait on Thursday banned all taxis, directed the state supply company to cover any basic food shortages and said it would disburse a month’s salary to all Kuwaiti students abroad.

Meanwhile, Saudi Arabia has released 250 foreign detainees held on non-violent immigration and residency offences as part of efforts to contain the spread of the disease, the state-backed Human Rights Commission said on Thursday. Bahrain and Kuwait have also announced prisoner releases.

The island nation of Bahrain has continued to evacuate several hundred Bahraini pilgrims stranded in Iran, which is an epicentre for the disease in the region, with over 29,000 cases reported and 2,400 deaths.

Bahrain earlier this month repatriated 165 people, but a number of subsequent scheduled flights were cancelled. At least 85 of the first batch of evacuees tested positive for the virus. 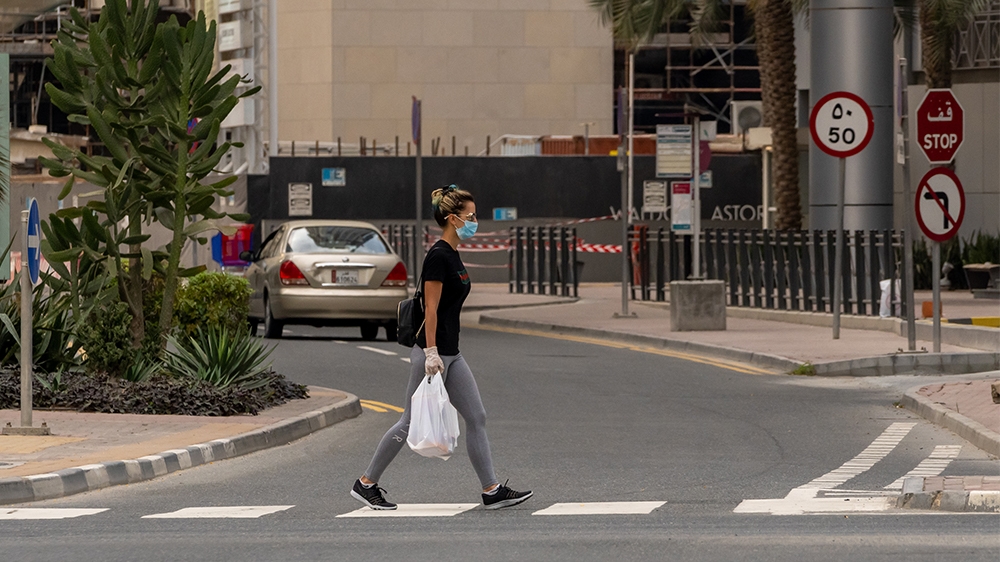 In Qatar, the government’s crisis committee ordered the closure of all non-vital shops, and cafes and entertainment outlets, and restricted the working hours of all other shops to 6am to 7pm.

Pharmacies, grocery stores and delivery services are excluded from these restrictions, the committee said in a press conference on Saturday.

Qatar recorded 12 new cases of the virus on Thursday, taking its total to 549.

King Salman orders ban on entry into and exit from capital Riyadh and the holy cities of Mecca and Medina.

Saudi Arabia reported its second coronavirus death and tightened a nationwide curfew, barring entry to and exit from the capital Riyadh and the holy cities of Mecca and Medina as well as movement between all provinces from on Wednesday.

The orders, approved by King Salman and published by state media, also brought forward the start of curfew in the three cities to 3pm from 7pm starting on Thursday.

Saudi Arabia introduced the 21-day curfew on Monday after registering a jump in infections. Its second death was that of a 46-year-old foreign resident in Mecca among 133 new cases taking the total to 900.

Across the six-nation Gulf Cooperation Council (GCC), the tally rose to 2,472 with seven deaths, as the United Arab Emirates registered 85 new infections, Oman 15, and Kuwait four.

In the UAE, the region’s tourism, business and transit hub, hundreds of Europeans were stranded after airports halted passenger flights earlier than expected.

Oil engineer Jamie Richardson had been due to return to the United Kingdom on Wednesday for a new job, but late on Tuesday, Dubai and Abu Dhabi airports announced flights would stop that night.

“It’s proper stressful. You have no idea what is going on,” he said.

Saudi Arabia has taken rigorous steps to contain the outbreak, also including halting international flights as well as suspending the Umrah year-round pilgrimage and closing mosques, schools, malls and restaurants.

The curfew and other restrictions have altered the rhythm of daily life in the country of some 30 million, many of whom enjoy late-night gatherings at coffee shops or private homes.

Turkish resident Nasif Erisik, who plays cards most nights with friends at one of their homes, said the group has resorted to online gaming to keep in touch.

“Corona has … changed our habits and everything in our lives,” said Erisik.

The authorities say they will fine or jail curfew-breakers and those encouraging violations. An Interior Ministry spokesman on Wednesday reported high compliance so far.

Dubai directed private sector companies to implement remote working systems for 80 percent of staff from now until April 9, the authority regulating business in the emirate, Dubai Economy, said on Twitter on Wednesday. Pharmacies, grocery stores, supermarkets and cooperative societies were excluded from the order.

UAE authorities have urged people to stay home but not announced an official curfew or suspended work. On Wednesday, they directed food retail outlets to remain open 24 hours a day but not exceed 30 percent capacity to ensure the physical distance of 2 metres (6 feet) between shoppers.

Organisers of the Expo 2020 Dubai world fair, scheduled to start in October and estimated to draw 11 million overseas visitors, confirmed one coronavirus case among staff and said they were reviewing plans and preparations.

DAMASCUS, Syria — Syria’s president and one of the United Arab Emirates’ most powerful leaders spoke on the phone on Friday — signalling a major thaw in Damascus’ troubled relations with Arab countries, which had mostly boycotted President Bashar Assad and backed his opposition.

Sheikh Mohammed, believed to be the Emirates’ day-to-day ruler, said Syria and the UAE need to “place the humanitarian solidarity over political issues during this common challenge ‘we are all facing’,” according to the report. The crown prince of the oil-rich Abu Dhabi affirmed that Syria “will not be left alone during these delicate and critical circumstances.”

Syria’s health system and infrastructure have been decimated by years of conflict. Although Damascus has recorded only five cases of infection with coronavirus, there are concerns the fast-spreading virus may prove a major test for the government.

The UAE had been a supporter of the Syrian opposition during the early years of the war, now in its tenth year. But as the war wound down and with the Syrian army capturing most of the territory that was once lost to the opposition, the UAE and a few Arab countries made limited and usually indirect openings toward Assad’s government.

In late 2018, the UAE reopened its embassy in Damascus, for the first time since an organized Arab diplomatic boycott soon after the Syrian war erupted in 2011. The embassy representation is at a charge d’affairs level but its very reopening was a sign that more rapprochement is likely to follow.

Friday’s phone call, however, is the first publicized contact between an Arab leader and Assad.

The Syrian opposition, which controls one overpopulated stretch of territory in northwestern Syria, is now mainly supported by Turkey, which the UAE and other Arab countries view with suspicion because of its embrace of regional Islamists.

Syria’s official presidency Twitter account said the crown prince stressed that the UAE will support the “Syrian people during these exceptional times.”