Columbus Day Kindergarten lesson: Consider engaging your students in a discussion about Christopher Columbus, an Italian explorer, in order to gain a clear understanding of his mission and his vessels. The East Indies were the place to buy silk fabrics and spices, so he set sail to find them. As a member of the Spanish royal family, he enjoyed sailing three famous ships: the Nina, Pinta and Santa Maria. On October 12, 1492, he touched down in San Salvador after sailing for over 72 days, thinking he reached his destination, but instead he discovered two new continents, North and South America. 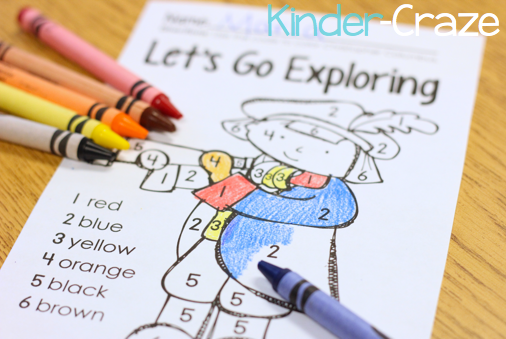 Bring out a world map or globe and show the children how far the trip from Spain was to San Salvador and the long voyage by boat. The children will also learn about great men and their explorations. You can get information about Columbus by visiting the library or your local bookshop.

The Nina, the Pinta, and the Santa Maria were the large ships Columbus sailed on with his crew. Children can make a simple ship craft to recreate one of the famous ships that sailed the ocean blue. 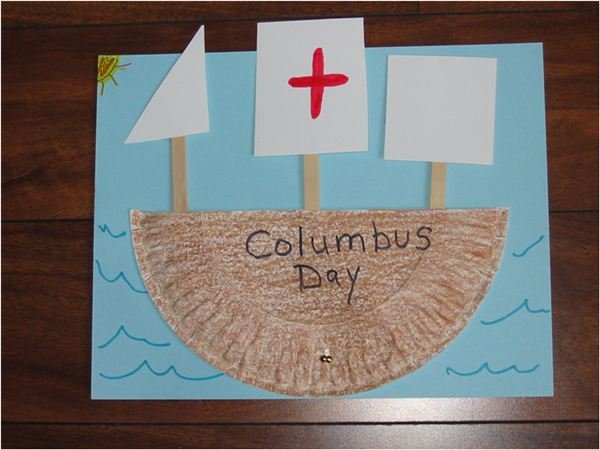 Make simple telescopes for the children to dramatize how Columbus searched for land.

Columbus was Italian and this flag craft represents the country of his birth.

The kids can now hold up the Italian flag that represents the birthplace of Christopher Columbus. 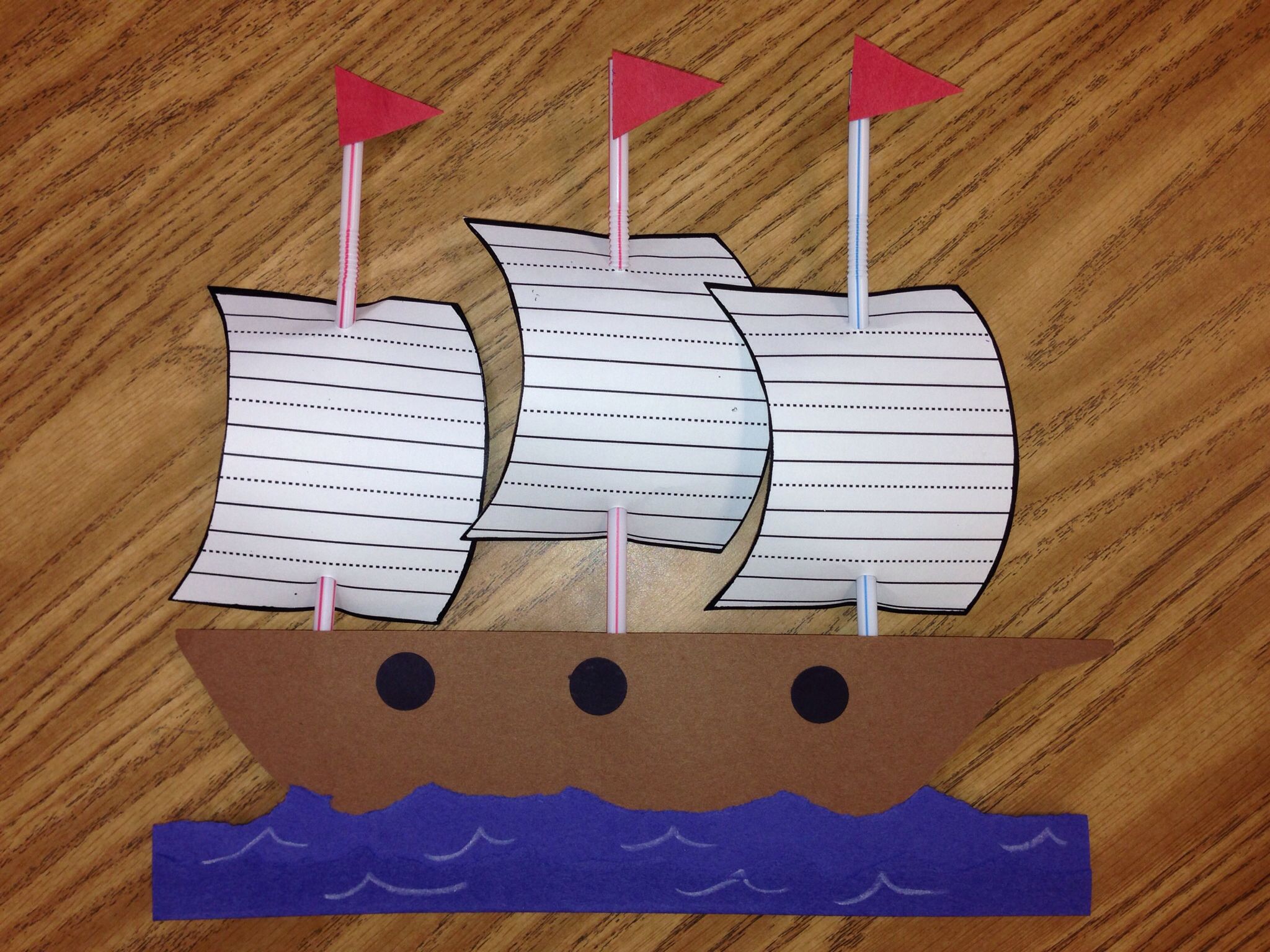 For this holiday, you can make egg ships as a lunch or snack activity. To prepare, peel hard-boiled eggs and cut each half in half lengthwise. The two halves form the ships. Slice American cheese into small squares. Help the children insert a toothpick into the egg yolk after threading the cheese on a toothpick. To represent the crew on board, you can decorate the egg ship with olives. Display the boats on a blue plate as if they are in the ocean.

Variation: Instead of cheese sails, colored paper sails can be used. 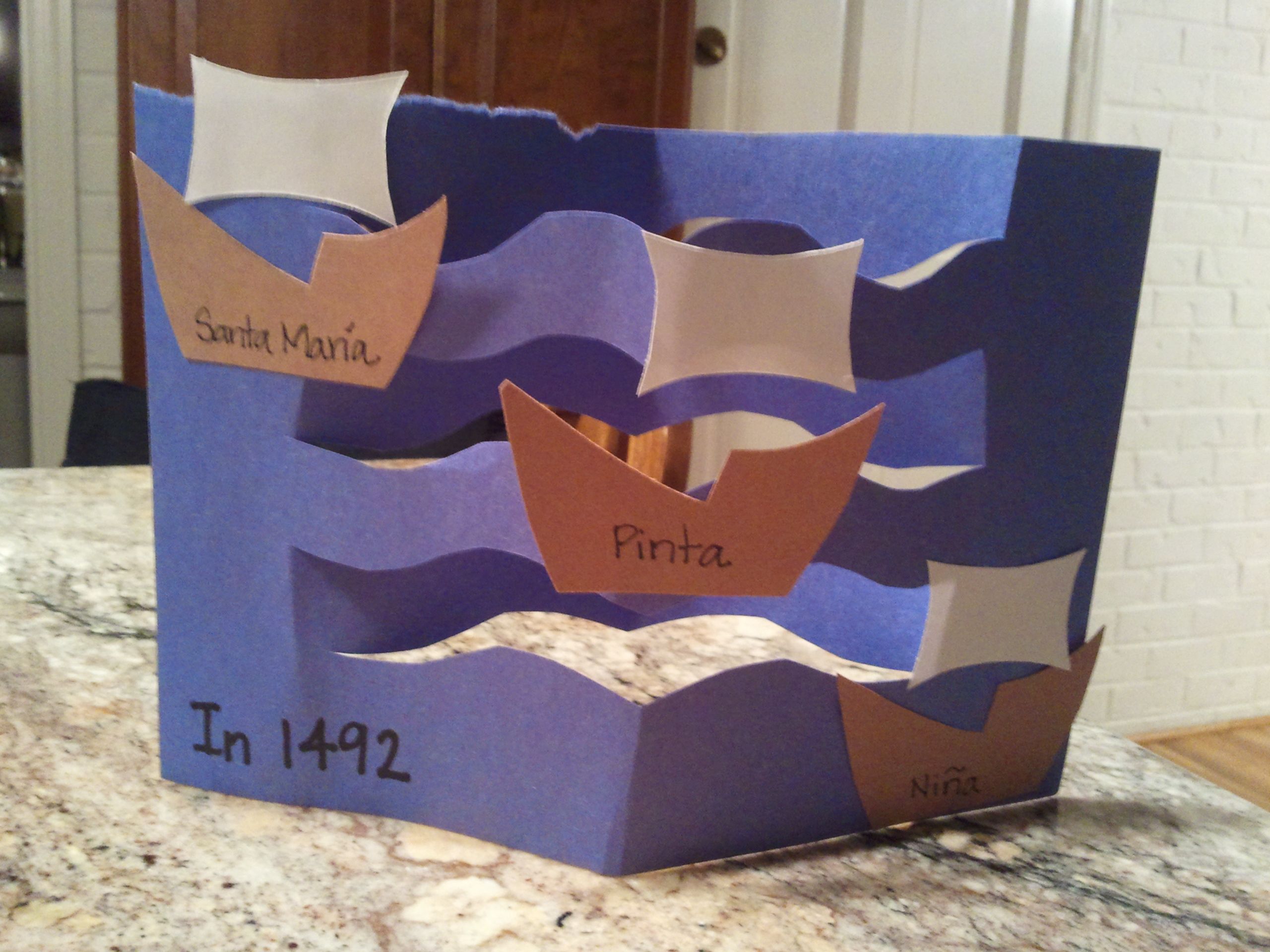 Columbus and his crew sailed the seas without access to stores to purchase supplies. In order to survive the trip, they needed to prepare ahead of time and take what they needed with them. Play this game by having the kids sit around the circle and discussing what Columbus will need today. Have them name the items Columbus will need. Tell children, “I am sailing with Columbus and I am taking water to drink.” Next, have them add their items to your statement. Each child repeats all the items mentioned by his partner before him and adds his own. This is a great memory game!

Something Old and Something New Game

Columbus and his sailors spent many days on the ships and were constantly looking for new experiences, especially land. Have the children sit in a circle and the adult will place about five items inside the circle. A cup, ball, pencil, toy, and so on can be used in this way. Have the children concentrate on the items, then close their eyes and hide their heads in their laps. The leader then tells them to open their eyes. The child in the center of the circle should recite the objects. Allow the kids to close their eyes again, and the adult will take away one object and replace it with something else. Continue playing until the children notice something missing or something they haven’t seen before. Keep playing until all the children are interested. 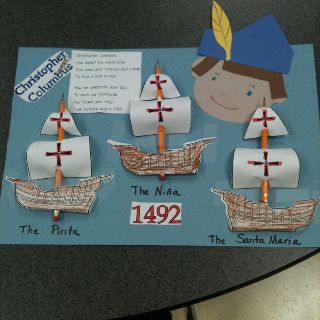 Columbus is credited with discovering America in 1492. Columbus Day is a special holiday celebrated in the United States in honor of his discovery. It always falls on the second Monday in October.

What would it be like to live on a crowded school bus for eight long months? Columbus and his men did not have much more room than that. They had an adventure to remember!

There is no doubt that Columbus sailed the ocean blue in 1492. But was he smart about safety?

He built sturdy ships.  Columbus’ ships Santa Maria, Pinta, and Nina were all meticulously constructed, and these are known records. The Pyrenees were dragged down to the sea for making frames, beams, and decks, as well as crooked pines for extra strength. He had no idea what dangers he would face, but he was sure that one of them might be storms at sea. 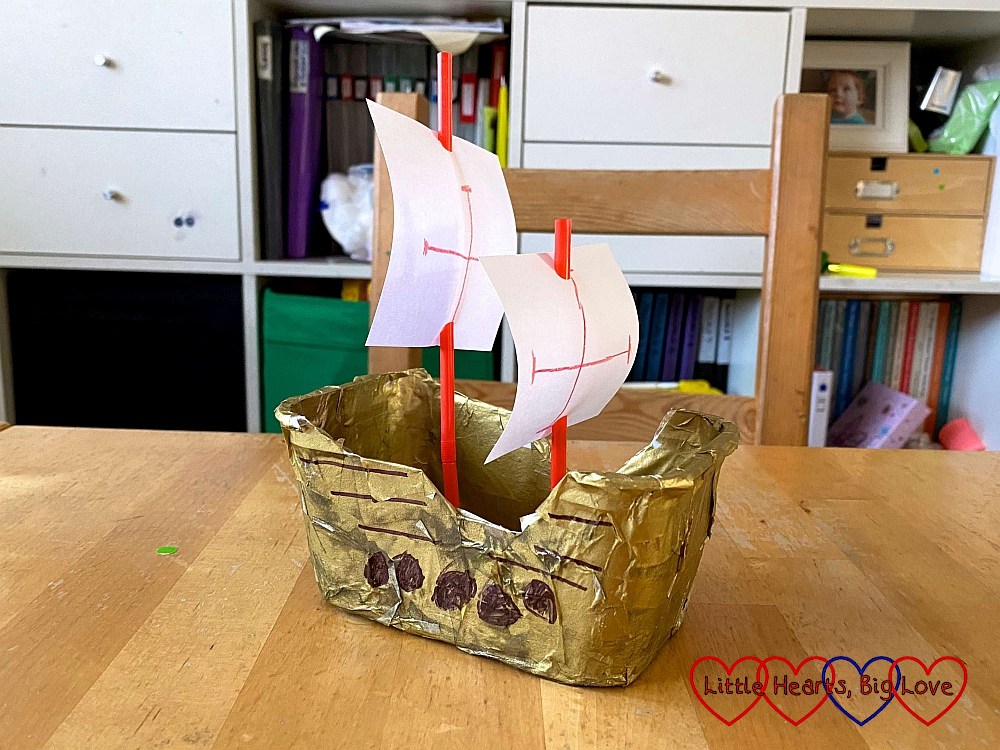 He protected his maps and charts. Columbus had a small cabin built on the Santa Maria that held his bed, a few personal belongings, and his maps and charts. It was the only cabin on board. He built space below the deck to store ample supplies. The hold – the space below deck – was used to store food, tools, ropes, extra sails, cannon balls, guns, and other supplies Columbus felt they might need on the trip.

He told his men that they could not drink the ocean water. Instead, Columbus and his crew drank water from wooden barrels they had brought on board, and wine from big casks.

He ordered his men to cook their meals. All meals were cooked in small fireplaces on deck called sandbox cookers, to reduce the risk of illness. Sandbox cookers were designed to allow cooking on deck safely, without catching the wood ship on fire.

He had at least one man on watch at all times. At least one member of the crew was always on watch, on the lookout for any danger including pirates, men overboard, reefs, and land. The man on watch was tucked high up on the 80-foot mainsail, in the “crow’s nest.” 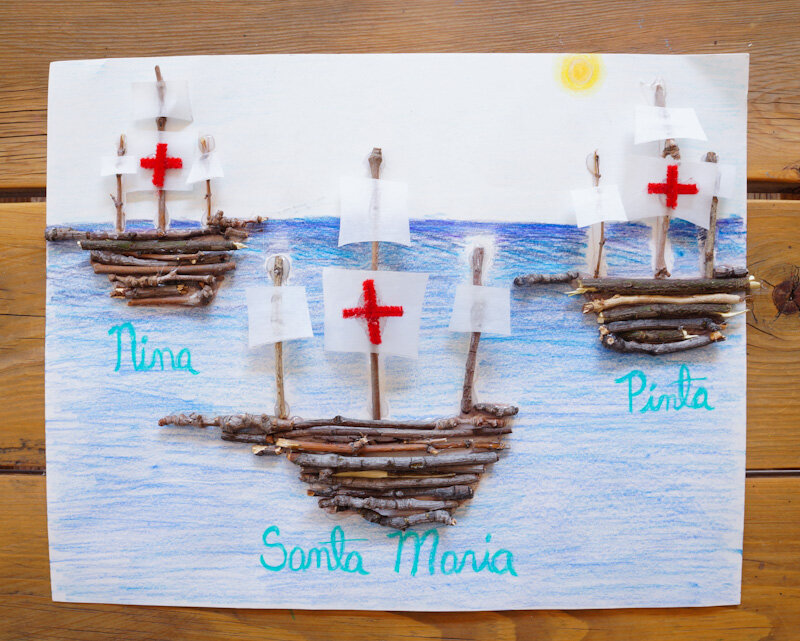 Columbus caught his first glimpse of the New World just two months after setting sail. That was a long time for 90 men to live in a space about the size of a school bus. Despite this, disease outbreaks were not reported. There were no overboard incidents. All passengers arrived safely. They did not rush to land after spotting land. There was probably a variety of reasons why they were so happy to find land.s. Still, they did not land right away. Columbus and his crew sailed along the shoreline. They stopped at a couple of places and established some base camps. They met the natives – some friendly, some not.  His careful planning and sturdy ships saved their lives.

After Columbus and his men decided to leave for Spain, they got into some trouble. By then, they were down to only two ships, making the situation even more crowded. The Santa Maria had been wrecked on Christmas Day that year. As Columbus was returning to Spain on the Nina, a smaller ship, he encountered another storm. A sixty foot building could not have survived the waves that tossed them around! Both the Nina and the Pinta were tossed around by the storm. Still, they managed to make their way home.

Including their adventures in the New World, the round trip took eight months. The voyage was well remunerated for Columbus. Aside from being highly respected, Columbus was also quite wealthy from his adventures. The couple had two children. Columbus had two sons and a daughter. Despite his stubborn nature, he had two children. He never once acknowledged that he had discovered a New World until he died. Despite his protestations, he maintained that he had discovered a way into China.

Columbus Day Government Holiday: Columbus Day is a U.S. occasion that honors the arrival of Christopher Columbus in the Americas in 1492, and Columbus Day 2021 happens on Monday, October 11. It was informally celebrated in various urban areas and states as ahead of schedule as the eighteenth century, yet didn’t turn into a government […]

Columbus Day Banned: Today is Columbus Day — besides in a developing number of urban areas and states that rather perceive Indigenous People’s Day. This pattern is a tragic turn of events. There is no specific explanation the United States needs to observe Christopher Columbus’ appearance in the New World. In any of his journeys, […]