Christmas Fern During this holiday season, it seemed a perfect time to profile a special native fern, Christmas fern, also known as Polystichum acrostichoides.  This evergreen fern is part of the Wood Fern Family (Dryopteridaceae), and it is said that wood ferns can usually be found to grow close by Christmas ferns.  It is native to eastern North America from Nova Scotia and Minnesota east and south to Florida and over to eastern Texas.  It is a common fern found in moist stream banks, swamps, thickets and dry and moist woods.

The name Polystichum comes from the Greek ‘polys‘, meaning many and ‘stichos‘, meaning row referring to the spores that are in many rows.  The name Christmas fern comes from the way the fronds remain evergreen right through the beginning of winter or later, and from the idea that the pinna or section of the frond resembles the shape of a stocking….look at the picture above to see if you think that is true.

One of the reasons I love this fern is because of its evergreen quality making it stand out among the brown leaf litter.  And it is an unusual fern appearing almost leathery, glossy and a bit coarse.  It grows from the roots without a crown up to 2 feet tall once it has been growing for a while.  I have moved mine around a bit so they are still getting established, and the pictures here show a small plant.  They are said to have silvery fiddleheads which I will have to watch for in spring.

As I profile this wonderful native fern, I am linking in with Gail@Clay and Limestone for her Wildflower Wednesday meme, and Diana@Elephant’s Eye at False Bay for her Dozen for Diana monthly meme. And I am joining forces once again this year with a local native plant nursery, Amanda’s Garden, to buy native plants for my garden.  The owner, Ellen Folts, specializes in woodland, prairie and wetland native perennials including this wonderful fern.

Christmas ferns grow in part shade to full, even deep shade, from zone 3-10.  They can tolerate drought better than

most ferns, but not wet conditions or too much sun.  And they do prefer organic, cool, moist to dry soil so you should amend your clay soil.  They do like sandy soil.   I find allowing leaves to mulch around the fern allows the soil to stay moist.

They are easy to establish but they do not naturalize and spread beyond the clump increasing in size over time.  These ferns have no serious insect or disease problems except they can develop rot if allowed to sit in water.  It is also good to remove brown fronds in spring as new growth emerges.

You can propagate this fern through root divisions.  They do produce spores on the narrower fronds that will appear to die in mid-summer.

Ferns in general are not often eaten by mammals such as deer or rabbits making them a good plant for your shade garden.

Many ground feeding and ground nesting birds like to use ferns for their habitat or home.  Wild turkeys and Ruffed Grouse are 2 such birds that are attracted to masses of ferns like Christmas fern.

The Christmas fern, is a popular plant to use in perennial, native plant and shade gardens.  They are easy to grow and adapt to a wide variety of growing conditions especially wet and dry shade, wall gardens, foundations and as a groundcover.

I have read that this fern is also good for controlling erosion on slopes.

Christmas ferns have been a popular fern to grow indoors since Victorian times.  They like morning sun and afternoon shade with evenly moist soil and misting once a week.  I may just try my hand at growing these indoors.

Native Americans people are said to have used this fern to treat a variety of ailments such as chills, fevers, pneumonia, stomach issues and rheumatism.

Some tribes used the fiddleheads for food.

Early settlers learned, from Native Americans, to use this plant for ailments and food. And many used this fern as a Christmas decoration because of its evergreen quality.

Do you grow Christmas fern?  What is your favorite fern? 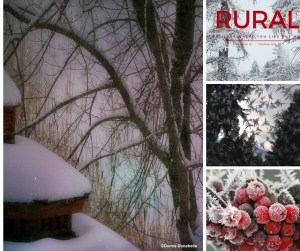 Don’t forget to check out the latest issue of RURAL, a free on-line magazine which is the creation of Jen@ The Light Laughed.  You can read an excerpt of my story, Winter’s Gifts, in this Christmas/Winter issue of RURAL. I am pleased to be featured in with so many creative and talented folks.  You can subscribe to RURAL here.

In A Vase On Monday

In celebration of the holiday season and this profile post, I am using Christmas Fern in a vase.  I placed the arrangement in a favorite shamrock vase.

The rose hips are from my native, Swamp Rose or Rosa palustris.  And the other greenery is boxwood.

I created more abstract pictures for this festive collage.

I am joining in with a few memes this week as I prepare this vase:  Cathy@Rambling in the Garden for her wonderful meme, In a Vase on Monday, and Judith@Lavender Cottage who hosts Mosaic Monday.

Every year, as soon as Thanksgiving dinner leftovers are wrapped up, most people’s attention immediately turns to the next major holiday on the calendar: Christmas. ‘Tis the season, right? A marathon of eating, drinking, and socializing — what’s not to like? If you need a little nudge to get into the holiday spirit (or you’re […]

The 12 best Christmas movies on Disney Plus you can stream right now Christmas movies, Nothing can stop the cold weather from coming, but a classic holiday movie always makes the chill feel much cozier. Thankfully, Disney’s new streaming service, Disney Plus, has plenty of heartwarming holiday films to choose from. Whether it’s a nostalgic […]