Thanksgiving jokes are the best way to celebrate and be thankful as they bring a lot of joy and warmth to everyone.

Thanksgiving is an event that brings everyone together. Who would miss a chance to have a fun time with their family and friends?

Thanksgiving is an American tradition where families get together and spend quality time with each other and give thanks. Here are great thanksgiving jokes for kids, so you can easily share them with your children. With these jokes to share, we are sure that your Thanksgiving day will be as wonderful as these jokes!

We hope you get some laughs from this list of the best thanksgiving jokes for kids, to entertain them and make Thanksgiving extremely memorable.

If you want to keep your kids entertained and laughing out loud, then these Thanksgiving one-liners and jokes for kids are just perfect. Here is a list of some of the funniest Thanksgiving jokes that are kid friendly and will tickle you, perfect to wash down your pumpkin pie!

1. What cars do Pilgrims generally like to drive? Plymouth

2. What usually comes at the start of the parade? The letter P.

3. What would a vampire call Thanksgiving? Fangs-giving.

4. What made the Thanksgiving meal so expensive? It had 24 carats.

5. What kind of dance is best suited for a Thanksgiving party? The turkey trot.

6. What kind of face does a Pilgrim make when he is in pain? Pil-grimace.

7. What is one difference between Thanksgiving and Halloween? One has gobblers and the other has goblins.

8. What always comes at the end of Thanksgiving? The letter G.

9. Where does Christmas come before Thanksgiving? In the dictionary.

10. Why would the Pilgrims’ pants always fall? Because they used to wear their belt buckle on their hat.

11. What is the Pilgrim’s favorite kind of music? Plymouth Rock.

12. What did the farmer raise a toast to on Thanksgiving day? Mashed potatoes.

13. What would a comedian call Thanksgiving? Pranks-giving.

14. Which band is the most loved during Thanksgiving? The Cranberries.

15. What’s that one thing common between you and a teddy bear on Thanksgiving night? Both will be filled with stuffing.

16. What was the name of the vegetable who recently retired? A has-bean.

17. What’s that one thing you can sink into a pie? Your teeth.

18. What did the pumpkin say after Thanksgiving dinner? Good-pie everyone.

19. What is generally used for making Thanksgiving bread? May flour. 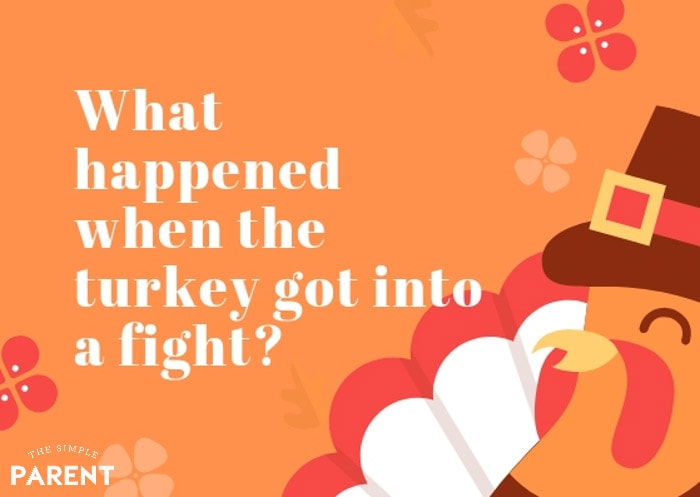 20. Who would guide the little pumpkins to cross roads safely at Thanksgiving? The crossing gourd.

23. What did baby corn ask mama corn? Where is Pop-corn?

22. What do you wear to a Thanksgiving night at home? A har-vest.

23. What was the pumpkin’s most loved sport? Squash.

25. What kind of vocabulary did the Pilgrim learn? Pilgrammar.

26. What did one cranberry say to another at Thanksgiving? ‘Tis the season to be jelly!

27. What do you normally call a small cup on Thanksgiving? A gobble-let.

28. What is small, round, and blue on the dinner table? A cranberry holding its breath.

29. When did Mayflower sailors eat dinner? At mari-time.

30. What is the most important thing to do for Thanksgiving night? Reservations.

31. What were the cranberries so embarrassed about? Because they saw the turkey dressing.

32. What was the turkey comedian’s favorite book? How to roast a turkey.

33. Which Thanksgiving treat do children love the most? Crayon-berry sauce.

34. What did Michael Scott say when he passed a plate of vegetables? Boom! Roasted.

35. If a sweet potato is hungry, what would he say to express that sentiment? Yes, I yam very hungry!.

36. What would a turkey say to the butter who kept on making jokes? You’re on a roll.

37. Why would a mother choose to make a turkey on Thanksgiving night? She wanted to make fast food.

Thanksgiving would be incomplete without a turkey and some jokes on the famous holiday turkey! So here it is! Here is a list of some fantastic and hilarious turkey related jokes for kids and everyone to laugh at.

38. Why did they send the turkey to prison? She had committed fowl play.

39. What would you call a turkey with no feathers? Thanksgiving dinner.

40. What would be inside a genie’s turkey? Wishbones.

41. Why did the turkey stop going to Church? They didn’t allow the use of fowl language.

42. What was the condition of the turkey after a fight? He got the stuffing knocked out of him.

43. What did the turkey cross the road twice? To show that he wasn’t chicken.

44. What makes up the most musical part of a turkey? The drumstick.

45. What desserts do turkeys love to eat? Peach gobbler.

47. What did the turkey say to the man before he got roasted? Oh! I’m stuffed!

48. What made turkeys always gobble about? Lack of table manners.

49. Why did the turkey cross the road? Because it was the chicken’s day off!

50. What would you call a turkey that can run? Fast food.

51. What website does a turkey always visit on the computer? Goobble.

52. What was the turkey searching for at Toys R Us? Gobbleheads.

53. Why did they suspend the turkey in the football match? For scoring a fowl play.

54. What is a turkey’s most favorite kind of weather? Fowl weather!

55. Who is not hungry at a Thanksgiving dinner? The turkey, because he is already stuffed!

56. Why should one never leave a turkey alone with an entire dessert? Because he would gobble the dessert up!

57. What sound did the turkey’s phone make when it rang? Wing, Wing! Wing, Wing!

58. What’s the key to a great Thanksgiving special dinner? The turKEY.

59. If fruits originate from a fruit tree, where do turkeys grow? A poul-tree.

60. What is common between a donkey, monkey, and a turkey? They all have keys.

61. What do turkeys generally like to do on sunny days? Have peck-nics!

62. Why did they hold the turkey during a criminal investigation? Because he attempted fowl play.

64. How did the turkey jump higher than Big Ben? Because a building can’t jump.

65. Which side of the turkey has the most feathers? The outside.

66. Why did the turkey chose to become a drummer? Because he already had the drumsticks.

67. Where do you find a turkey with no legs? After Thanksgiving dinner.

68. How did the turkey get home for Thanksgiving? She took the gravy train.

69. Which bird is considered to be the best at bowling? A turkey.

70. What would a turkey be called on the day after Thanksgiving? Lucky.

71. Where would a turkey normally go for a dance? A butterball.

72. Which dessert does a turkey like the most? An apple gobbler.

73. What is one difference between a chicken and a turkey during Thanksgiving? Chickens get to celebrate Thanksgiving!

74. Who was the turkey really grateful for at this year’s Thanksgiving? All the vegetarians.

75. What did the coach turkey say to the student turkey after the fight was over? You played well and got the stuffing knocked off the court.

76. What would a turkey ghost be called? A poultry-geist!

Dewey have to wait much longer for our Thanksgiving dinner?

Arthur any leftovers for us.

Harry up, please! We are getting really hungry.

Please don take away all of the turkey, I’d like to have some more.

Turkey’s all ready, come to the table.

Luke at all the food and drinks here, they look so tasty.

Will Ma make all of the food tonight or will we be eating out? 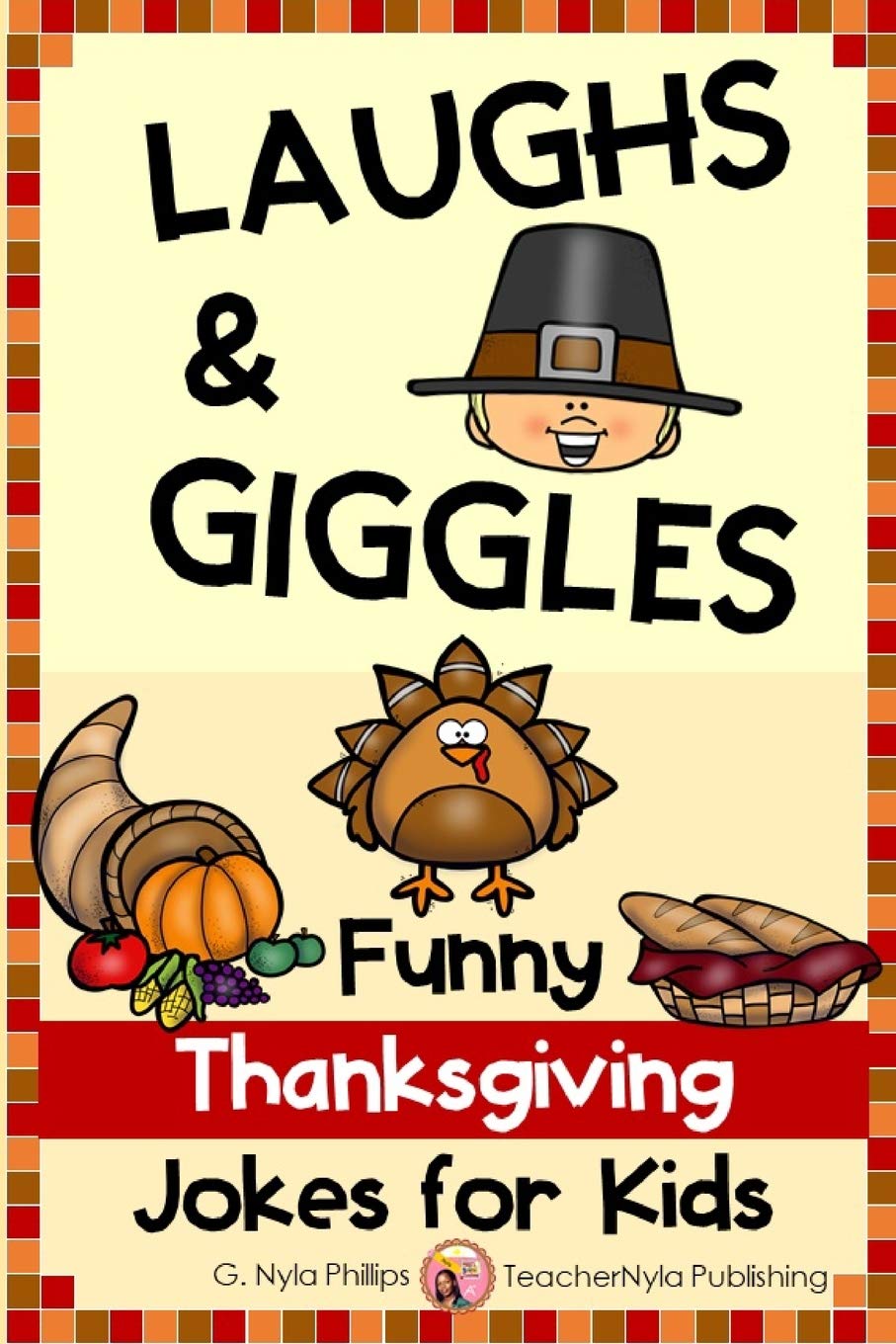 Anita-nother plate of turkey for my sister please!

Psalms Of Thanksgiving The Bible is full of meaningful verses and stories that guide us through life’s trying times and happy moments alike. This time of year, as we give thanks for all of life’s blessings, these Psalms about Thanksgiving help us express the gratitude we’re feeling. These and other Bible verses about being thankful remind us […]

Happy Thanksgiving Memes There are so many things to be thankful for and if you’re looking for a good happy Thanksgiving meme you can express your gratitude with, then you’re in luck. Below is our best collection of Thanksgiving memes that are so hilarious, they can make anyone laugh. They are perfect to share with your friends […]