The authority to amend the Constitution of the United States is derived from Article V of the Constitution. After Congress proposes an amendment, the Archivist of the United States, who heads the National Archives and Records Administration (NARA), is charged with responsibility for administering the ratification process under the provisions of 1 U.S.C. 106b. The Archivist has delegated many of the ministerial duties associated with this function to the Director of the Federal Register. Neither Article V of the Constitution nor section 106b describe the ratification process in detail. The Archivist and the Director of the Federal Register follow procedures and customs established by the Secretary of State, who performed these duties until 1950, and the Administrator of General Services, who served in this capacity until NARA assumed responsibility as an independent agency in 1985.

The Archivist submits the proposed amendment to the States for their consideration by sending a letter of notification to each Governor along with the informational material prepared by the OFR. The Governors then formally submit the amendment to their State legislatures or the state calls for a convention, depending on what Congress has specified. In the past, some State legislatures have not waited to receive official notice before taking action on a proposed amendment. When a State ratifies a proposed amendment, it sends the Archivist an original or certified copy of the State action, which is immediately conveyed to the Director of the Federal Register. The OFR examines ratification documents for facial legal sufficiency and an authenticating signature. If the documents are found to be in good order, the Director acknowledges receipt and maintains custody of them. The OFR retains these documents until an amendment is adopted or fails, and then transfers the records to the National Archives for preservation.

A proposed amendment becomes part of the Constitution as soon as it is ratified by three-fourths of the States (38 of 50 States). When the OFR verifies that it has received the required number of authenticated ratification documents, it drafts a formal proclamation for the Archivist to certify that the amendment is valid and has become part of the Constitution. This certification is published in the Federal Register and U.S. Statutes at Large and serves as official notice to the Congress and to the Nation that the amendment process has been completed.

In a few instances, States have sent official documents to NARA to record the rejection of an amendment or the rescission of a prior ratification. The Archivist does not make any substantive determinations as to the validity of State ratification actions, but it has been established that the Archivist’s certification of the facial legal sufficiency of ratification documents is final and conclusive.

Why do we need an amendment process?

Article V describes the process for amending the Constitution. But the Framers intended for the amendment process to be difficult: although the federal government could add amendments, three-fourths of states have to ratify every amendment.

“The Congress, whenever two thirds of both Houses shall deem it necessary, shall propose Amendments to this Constitution, or, on the Application of the Legislatures of two thirds of the several States, shall call a Convention for proposing Amendments, which, in either Case, shall be valid to all Intents and Purposes, as Part of this Constitution, when ratified by the Legislatures of three fourths of the several States, or by Conventions in three fourths thereof, as the one or the other Mode of Ratification may be proposed by the Congress; Provided that no Amendment which may be made prior to the Year One thousand eight hundred and eight shall in any Manner affect the first and fourth Clauses in the Ninth Section of the first Article; and that no State, without its Consent, shall be deprived of its equal Suffrage in the Senate.” 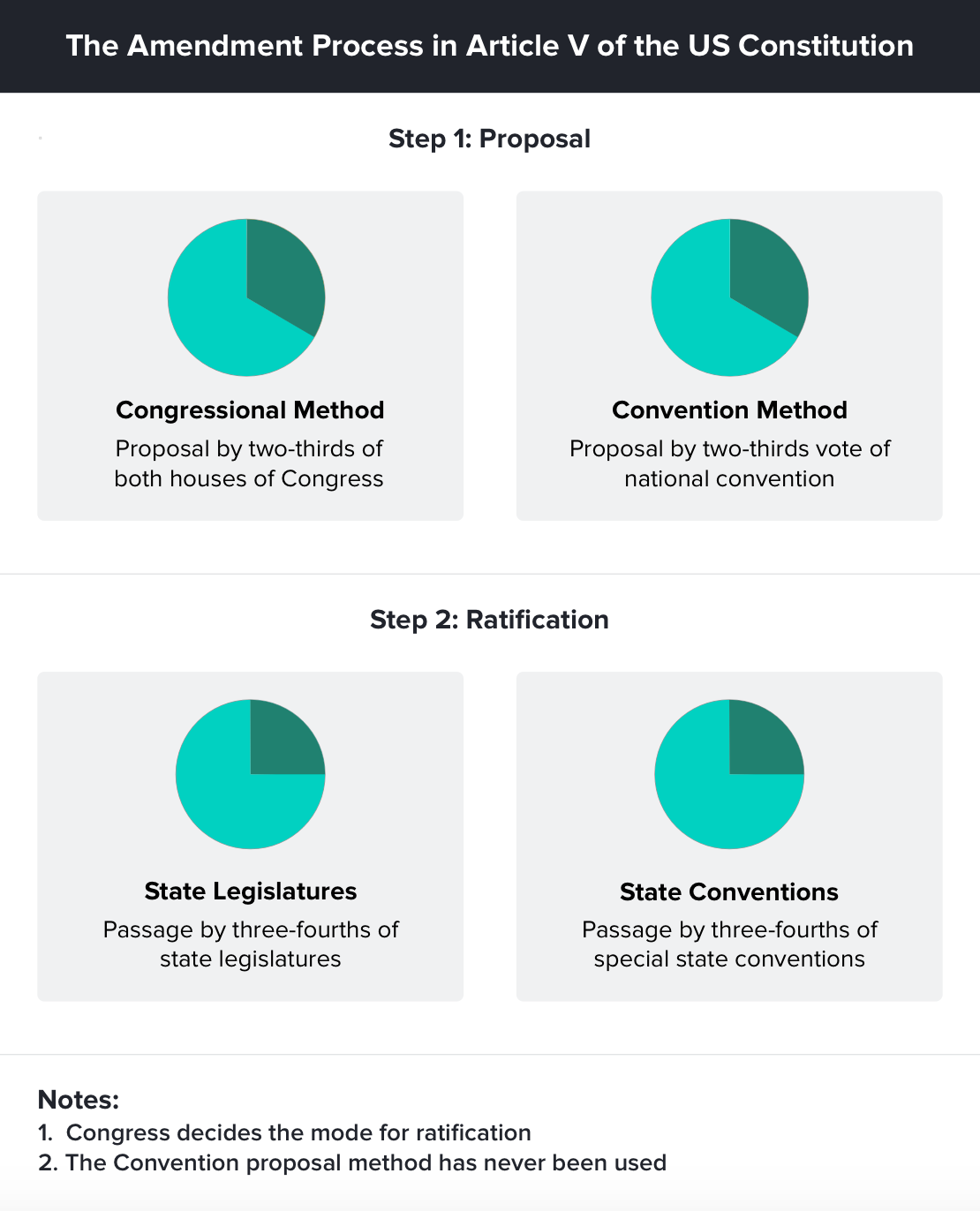 Challenges to the amendment process

Between 1789 and 2014, over 11,000 amendments have been proposed; however, only 27 amendments have been ratified. Why is it so hard for proposed amendments to receive support for final ratification? A few roadblocks are standing in the way.
First, every amendment must receive support from three-fourths of state conventions or state legislatures. It’s incredibly difficult to get that many states to agree on a permanent change to the Constitution.
Take, for example, the Equal Rights Amendment, or ERA. The ERA was introduced in 1923. It finally passed Congress in 1972 and was sent to the states for ratification. The ERA was designed to guarantee equal rights for all citizens regardless of sex. It fell three states short of ratification and so was not added to the Constitution.
Second, for an amendment to be passed through the congressional proposal method, two-thirds of Congress must propose the amendment. To introduce a new amendment the two parties must cooperate, as no one party has controlled two-thirds of both the House of Representatives and the Senate. With each party supporting different ideological goals, getting two-thirds of Congress to agree on a change to the Constitution is nearly impossible without some level of cooperation.
The process is so difficult that it could take years before the US Constitution has its 28th amendment. Some amendments continue to pop up in Congress, including an amendment requiring Congress to pass a balanced budget, an amendment setting term limits for members of Congress, and amendments defining who can get married.

Current efforts by some state legislatures and other groups to amend the U.S. Constitution have brought forth questions about the process for doing so. The Founding Fathers, in crafting the Constitution, believed it should not be easy to amend the nation’s founding document and principles.

Authority to Amend the U.S. Constitution

To date, Congress has submitted 33 amendment proposals to the states, 27 of which were ratified. The 27th Amendment, which prevents members of Congress from granting themselves pay raises during a current session, was ratified in 1992—202 years after it was first submitted to the states.

The following steps must be completed for an amendment proposed by Congress to be added to the United States Constitution.\

Step 1. Passage by Congress. Proposed amendment language must be approved by a two-thirds vote of both houses.

Step 2. Notification of the states. The national archivist sends notification and materials to the governor of each state.

Step 3. Ratification by three-fourths of the states. Ratification of the amendment language adopted by Congress is an up-or-down vote in each legislative chamber. A state legislature cannot change the language. If it does, its ratification is invalid. A governor’s signature on the ratification bill or resolution is not necessary.

Step 4. Tracking state actions. Proposed amendments must be ratified by three-fourths of the states in order to take effect. Congress may set a time limit for state action. The official count is kept by Office of the Federal Register at the National Archives. Legislatures must return specific materials to show proof of ratification.

Step 5. Announcement. When the requisite number of states ratify a proposed amendment, the archivist of the United States proclaims it as a new amendment to the U.S. Constitution. Actual certification is published immediately in the Federal Register and eventually in the United States Statutes-at-Large.

State legislatures often call upon Congress to propose constitutional amendments. While these calls may bring some political pressure to bear, Congress is under no constitutional obligation to respond. The U.S. Constitution does not contain a provision requiring Congress to submit a proposed amendment upon request by some requisite number of states.

In addition to constitutional amendments proposed by Congress, states have the option of petitioning Congress to call a constitutional convention. Legislatures in two-thirds of states must agree, however. While the convention process has yet to be triggered, efforts to do so are not new. In fact, they may be “as old as the republic.” Unofficial sources report convention applications being filed as early as 1789.

Interest in a U.S. constitutional convention has peaked and waned several times over the decades. In the early 1900s, direct election of senators was a hot topic. In the 1940s and 1950s, federal taxing power was the focus of many applications. Two issues came close to triggering conventions during the 1960s to 1990s—apportionment and a balanced federal budget.

The current wave of interest began around 2010. Its focus is not a single issue nor is it being driven by one organization. Various groups are pushing their viewpoints—be they conservative, liberal, populist or progressive—and are urging action. On the one hand, legislation calls for a convention on a broad array of topics, such as limiting authority of the federal government, balanced federal budget, campaign finance reform, congressional term limits or federal debt. On the other hand, some legislation proposes to rescind previous calls for a convention.

Happy New Year Wishes For Colleagues s we are advancing with the time towards the end of the year, we have this big celebration coming up called new year.  New Year is going to be one of the happiest and memorable events for most of us. Mostly, new year is a holiday for many schools […]

Pope Francis was born in  Jorge Mario Bergoglio on 17 December 1936 is the 266th and current pope of the Catholic Church. He was elected on 13 March 2013. He chose the name Francis to honor St. Francis of Assisi. Pope Francis has been eminently quotable. We here have some of the most famous Pope Francis Quotes, Sayings and Images here for you.   […]