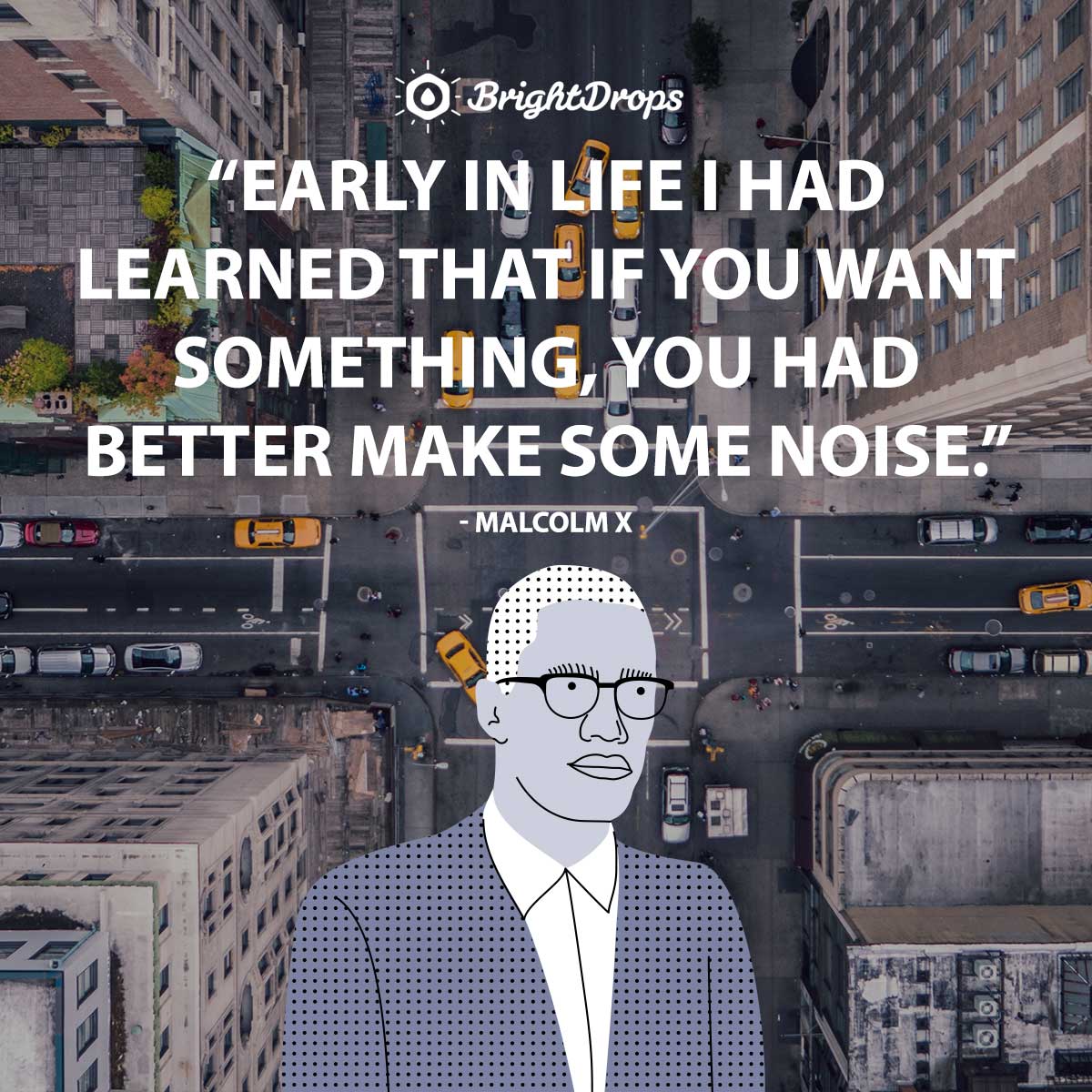 “Early in life I had learned that if you want something, you had better make some noise.” – Malcolm X

“I for one believe that if you give people a thorough understanding of what confronts them and the basic causes that produce it, they’ll create their own program, and when the people create a program, you get action.” – Malcolm X

“People don’t realize how a man’s whole life can be changed by one book.” – Malcolm X

“A man who stands for nothing will fall for anything.” – Malcolm X

“You will never catch me with a free fifteen minutes in which I’m not studying something I feel might be able to help the black man.” – Malcolm X

“In all our deeds, the proper value and respect for time determines success or failure.” – Malcolm X 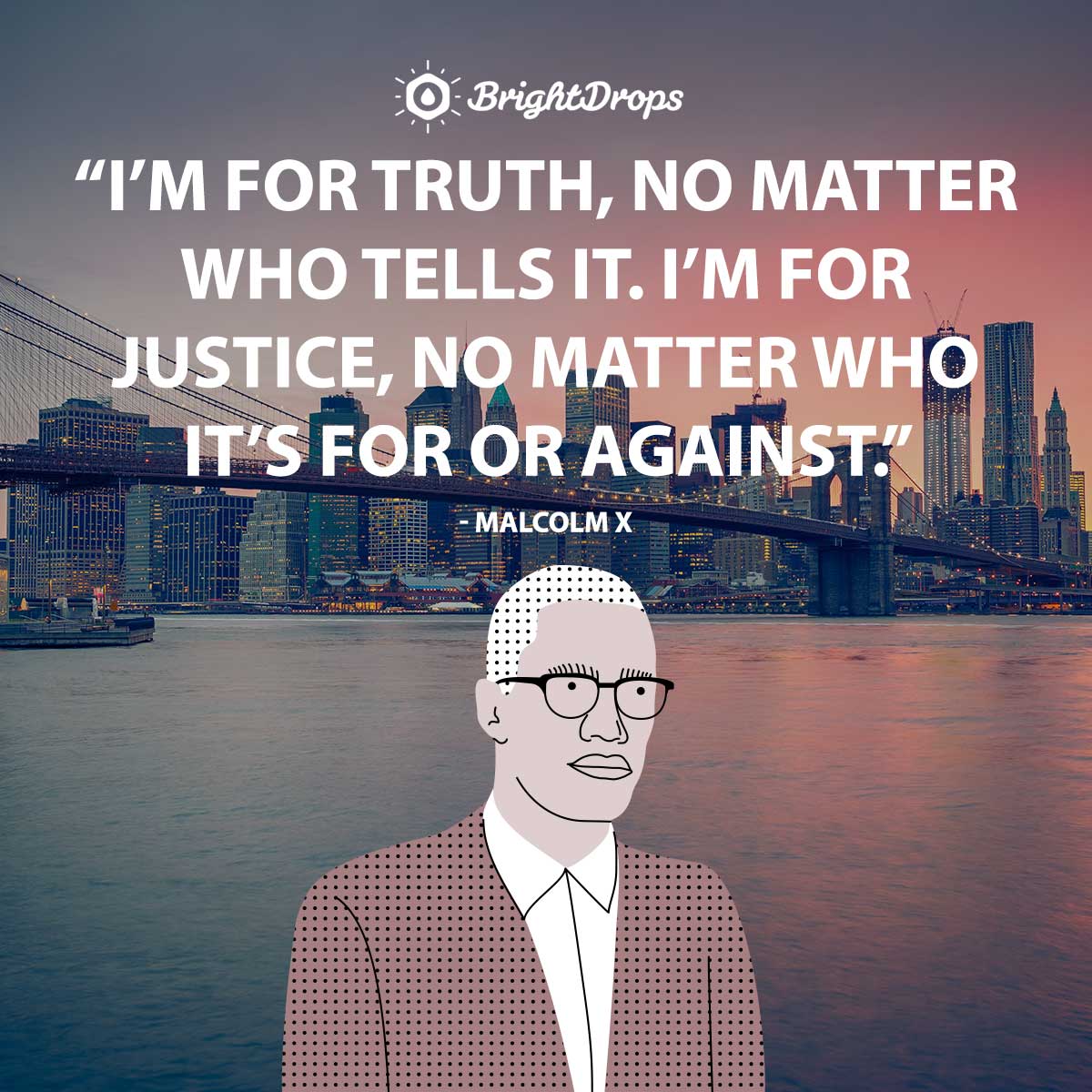 “If you’re not ready to die for it, put the word ‘freedom’ out of your vocabulary.” – Malcolm X

“Who taught you to hate yourself?” – Malcolm X

“The thing that you have to understand about those of us in the Black Muslim movement was that all of us believed 100 percent in the divinity of Elijah Muhammad. We believed in him. We actually believed that God, in Detroit by the way, that God had taught him and all of that. I always believed that he believed in himself. And I was shocked when I found out that he himself didn’t believe it.” – Malcolm X

“Envy blinds men and makes it impossible for them to think clearly.” – Malcolm X

“You don’t have to be a man to fight for freedom. All you have to do is to be an intelligent human being.” – Malcolm X

“The future belongs to those who prepare for it today.” – Malcolm X

“History is a people’s memory, and without a memory, man is demoted to the lower animals.” – Malcolm X 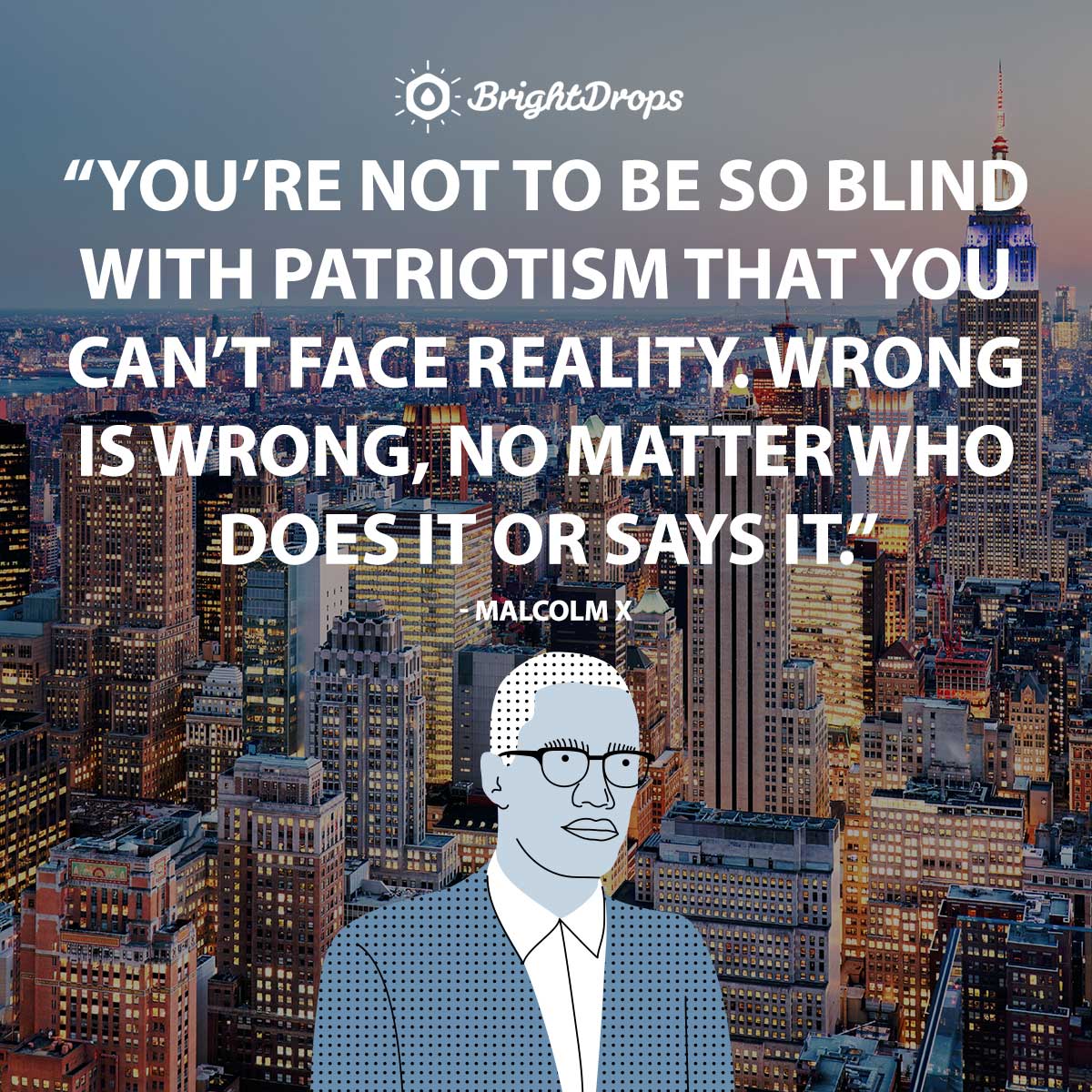 “You’re not to be so blind with patriotism that you can’t face reality. Wrong is wrong, no matter who does it or says it.” – Malcolm X

“History is not hatred.” – Malcolm X

“Time is more important to me than distance.” – Malcolm X

“How can anyone be against love?” – Malcolm X

“Concerning nonviolence, it is criminal to teach a man not to defend himself when he is the constant victim of brutal attacks.” – Malcolm X

“A race of people is like an individual man; until it uses its own talent, takes pride in its own history, expresses its own culture, affirms its own self hood, it can never fulfill itself.” – Malcolm X

“Change is only a good thing if you change in a good way.” – Malcolm X

“They put your mind right in a bag, and take it wherever they want.” – Malcolm X

“Any time you beg another man to set you free, you will never be free. Freedom is something that you have to do for yourselves.” – Malcolm X 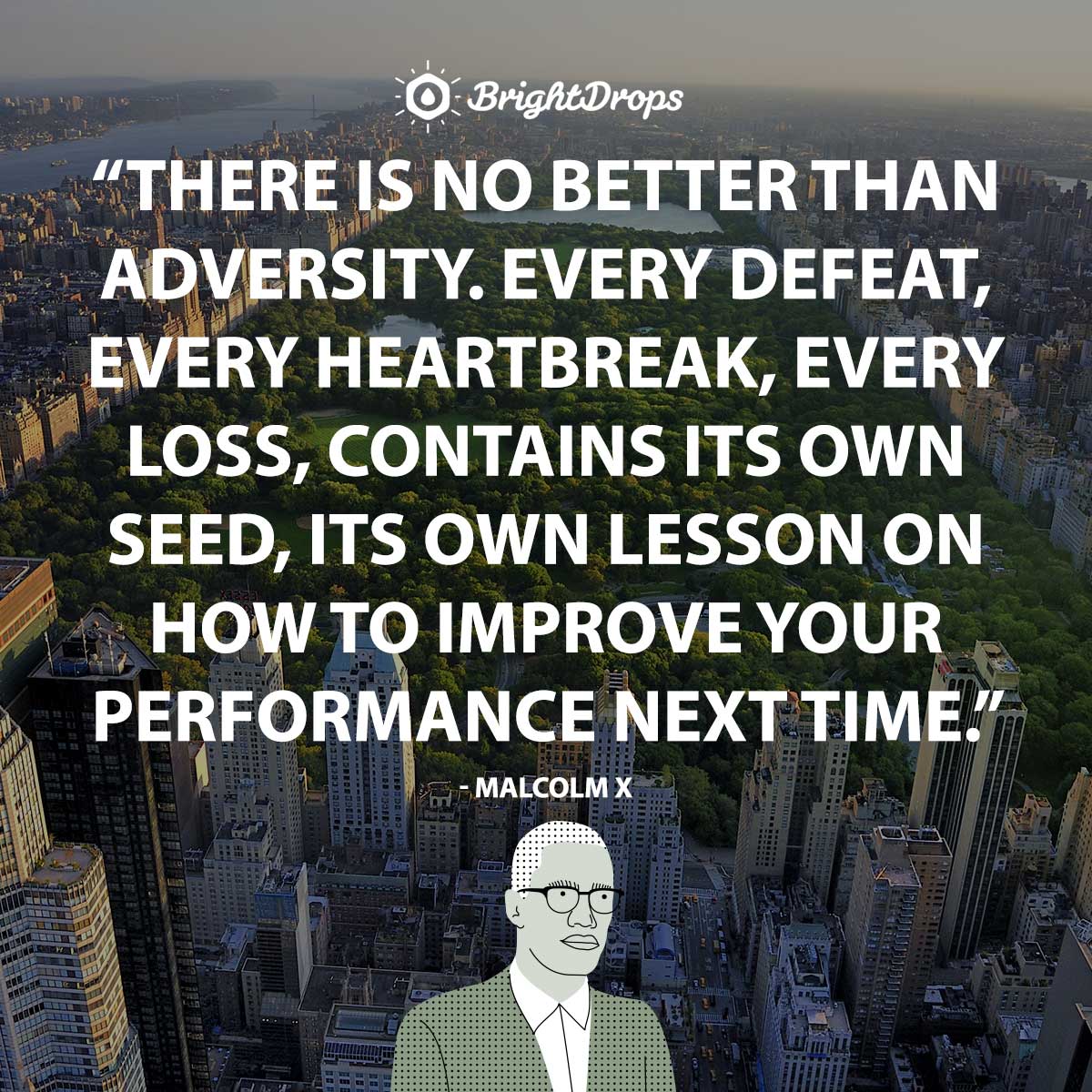 “There is no better than adversity. Every defeat, every heartbreak, every loss, contains its own seed, its own lesson on how to improve your performance next time.” – Malcolm X

“I feel like a man who has been asleep somewhat and under someone else’s control. I feel that what I’m thinking and saying is now for myself.” – Malcolm X

“My alma mater was books, a good library… I could spend the rest of my life reading, just satisfying my curiosity.” – Malcolm X

“Education is the passport to the future, for tomorrow belongs to those who prepare for it today.” – Malcolm X

“Usually when people are sad, they don’t do anything. They just cry over their condition. But when they get angry, they bring about a change.” – Malcolm X

“I came here to tell the truth – and if the truth condemns America, then she stands condemned!” – Malcolm X

“When a person places the proper value on freedom, there is nothing under the sun that he will not do to acquire that freedom. Whenever you hear a man saying he wants freedom, but in the next breath he is going to tell you what he won’t do to get it, or what he doesn’t believe in doing in order to get it, he doesn’t believe in freedom. A man who believes in freedom will do anything under the sun to acquire . . . or preserve his freedom.” – Malcolm X 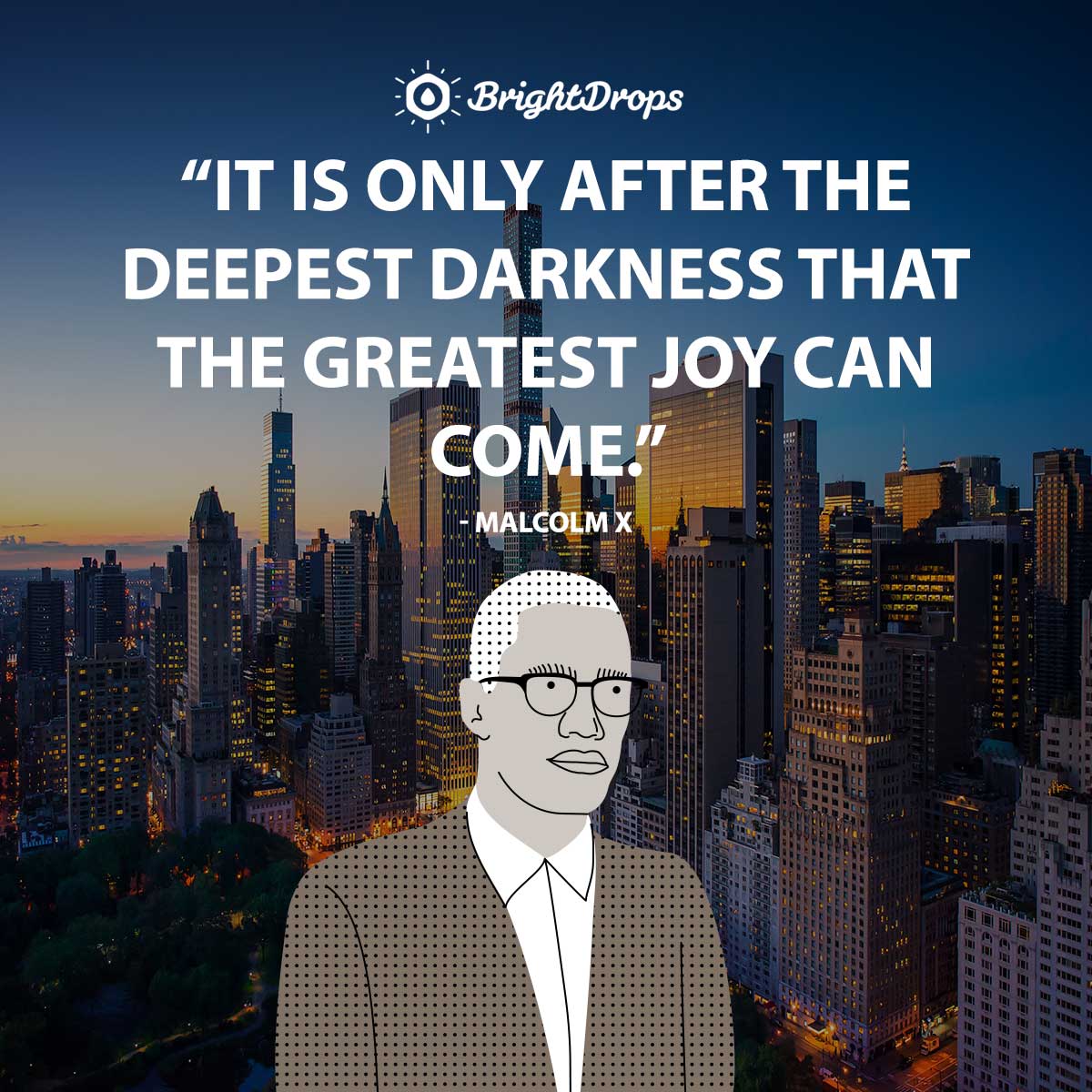 “It is only after the deepest darkness that the greatest joy can come.” – Malcolm X

“Truth does not change, only our awareness of it.” – Malcolm X

“The truth can be quickly received, or received at all, only by the sinner who knows and admits that he is guilty of having sinned much.” – Malcolm X

“Don’t be in a hurry to condemn because he doesn’t do what you do or think as you think or as fast. There was a time when you didn’t know what you know today.” – Malcolm X

“America’s greatest crime against the black man was not slavery or lynching, but that he was taught to wear a mask of self-hate and self-doubt.” – Malcolm X

“One day, may we all meet together in the light of understanding.” – Malcolm X

“History is a people’s memory, and without a memory, a man is demoted to the lower animals.” – Malcolm X

“Stumbling is not falling.” – Malcolm X

“If you have no critics you’ll likely have no success.” – Malcolm X

“Without education, you’re not going anywhere in this world.” – Malcolm X

“It is the process of mis-education that inhibits the full potential of a nation.” – Malcolm X

“I am not a racist. I am against every form of racism and segregation, every form of discrimination. I believe in human beings, and that all human beings should be respected as such, regardless of their color.” – Malcolm X

“I was going through the hardest thing, also the greatest thing, for any human being to do; to accept that which is already within you, and around you.” – Malcolm X

“If something is yours by right, then fight for it or shut up.” – Malcolm X

“In any organization, someone must be the boss. If it’s even just one person, you’ve got to be the boss of yourself.” – Malcolm X

Yes, many of us dread Mondays and if we could skip it, we would. However, till we all master time traveling and some other Harry Potter like moves, we’re stuck with Mondays. Mondays don’t have to give you a miserable feeling about the future. The new week is worth celebrating and you need just the […]

Time is something that is so precious and cannot be bought. It is something that you can never bring back once it has passed. No one has yet invented a machine that can bring you back to the time you want to be in. You still cannot change anything at all in your life even […]