How easy is it to be father to your children? It’s probably a lot of work. Now you have to do a lot more work when you are raising a daughter. She’s adventurous, inquisitive, emotional and likely to try running away with some boy from school. Girls could sometimes be a handful but they are also lovely.

No father ever wants to miss out on watching his daughter grow into a woman. This is why the father-daughter bond is such an interesting subject to read about. You are about to see some of the most refreshing perspectives on father and daughter relationships.

#1: Be willing to teach your daughter what it means to be a man, because if her father doesn’t teach her, there are wolves out there.

#2: It’s almost an impossible task to separate fathers from their daughters, that bond is something mysteriously awesome and it can only be made from heaven. 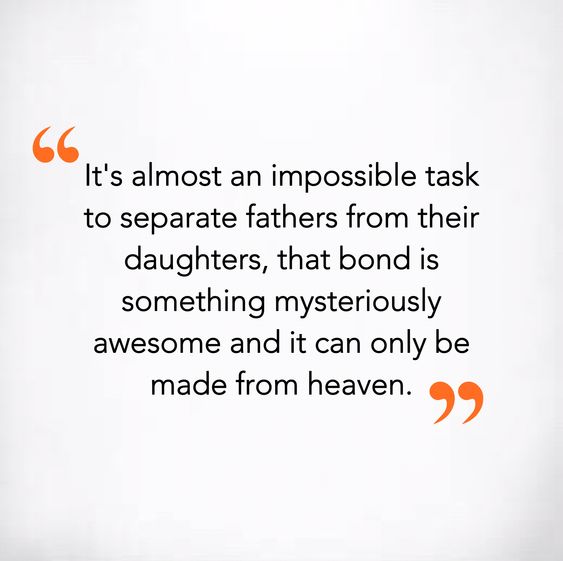 #3: You might never know a man’s vulnerable place until you see him with his daughter, because with her, he seem capable of more human emotions than he will ever share with anyone else. 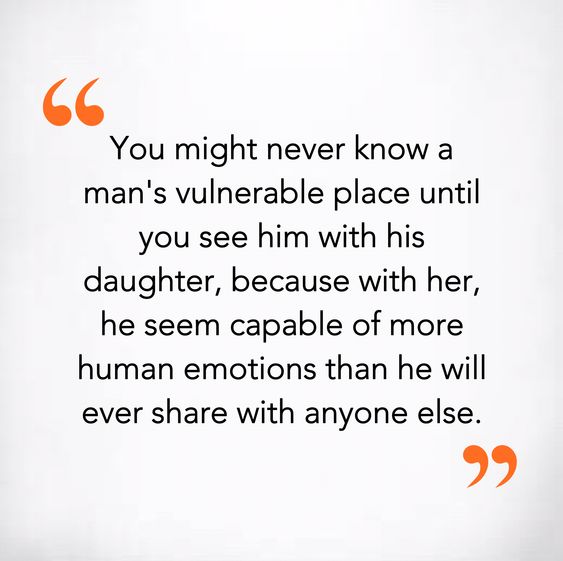 #4: The most admirable thing ever has to be a father protecting his daughter. 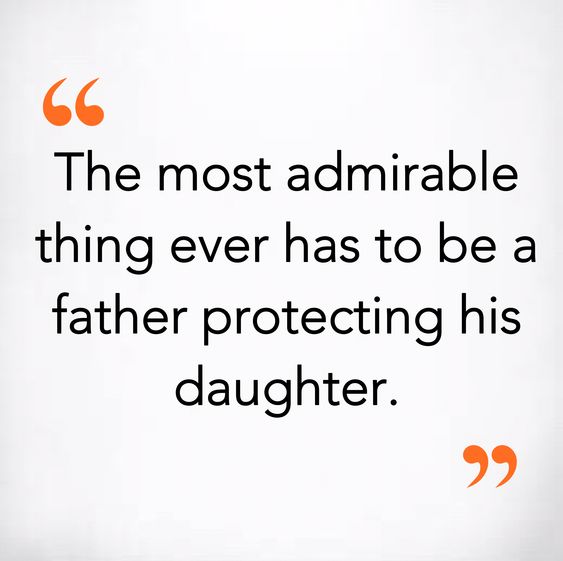 #5: There are too many deadbeat fathers out there who leave their daughters broken and unloved. 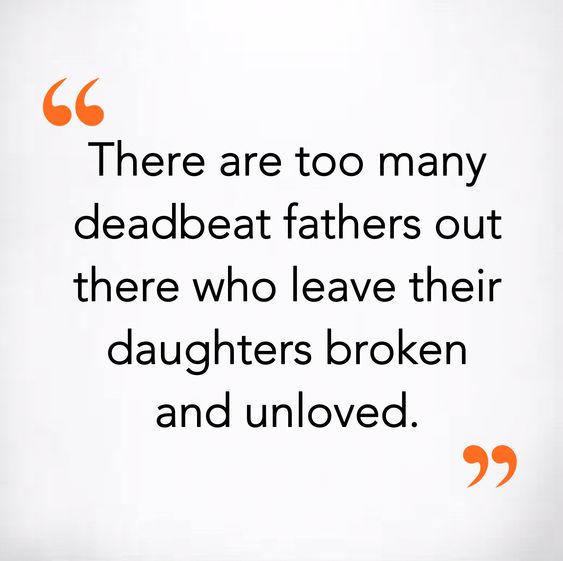 #6: One of the first duties of a father is to protect his daughter from crying or else make those who make her cry to pay for their crimes. 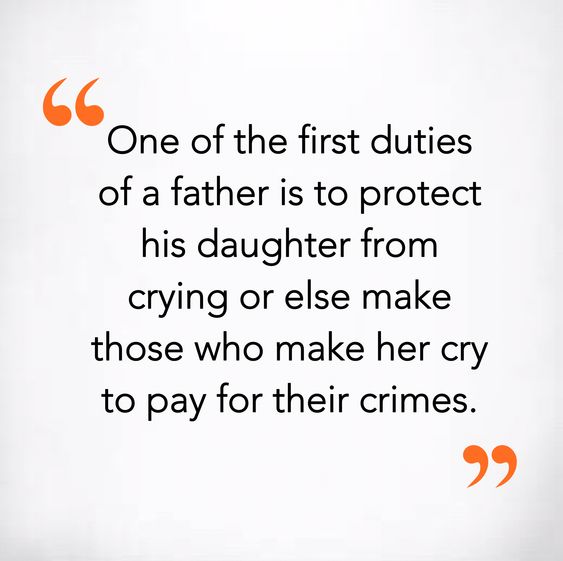 #7: A girl might learn an ocean of wisdom from her mother but having her father’s presence is one part of the equation that should never be compromised. 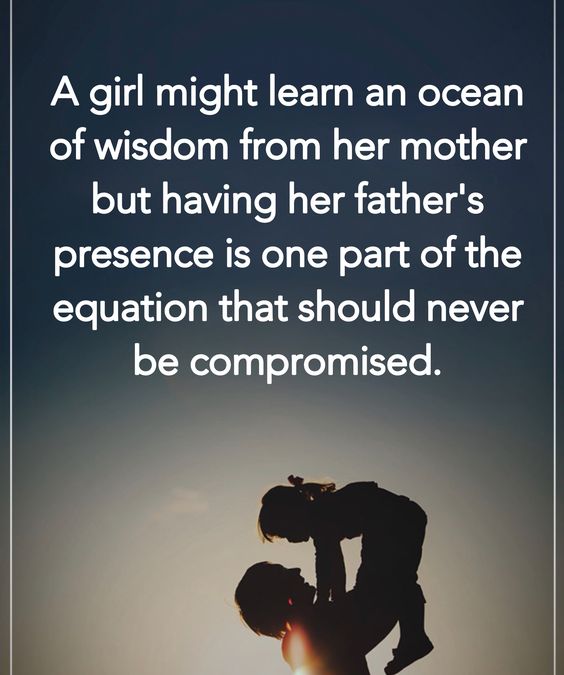 #8: As a father, you are going to be the first person to experience all the complexities of your daughter and you must tolerate them enough to guide her. 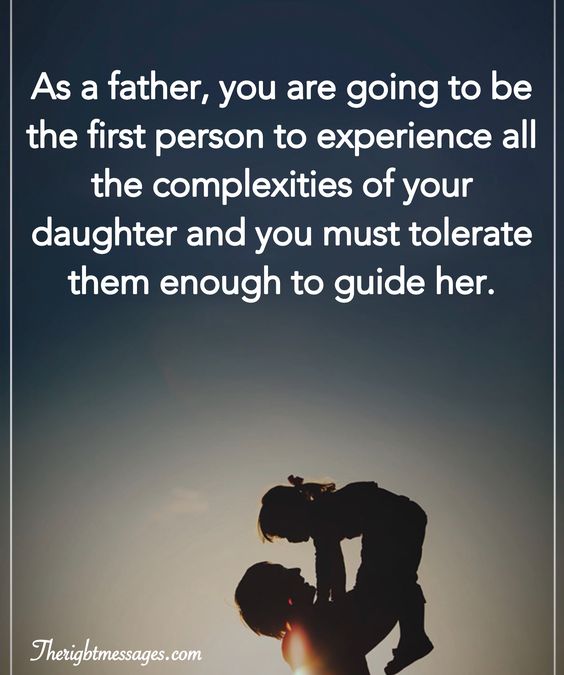 #9: The first man in your daughter’s life is her father and she needs your trust more than anything, don’t deny her that. 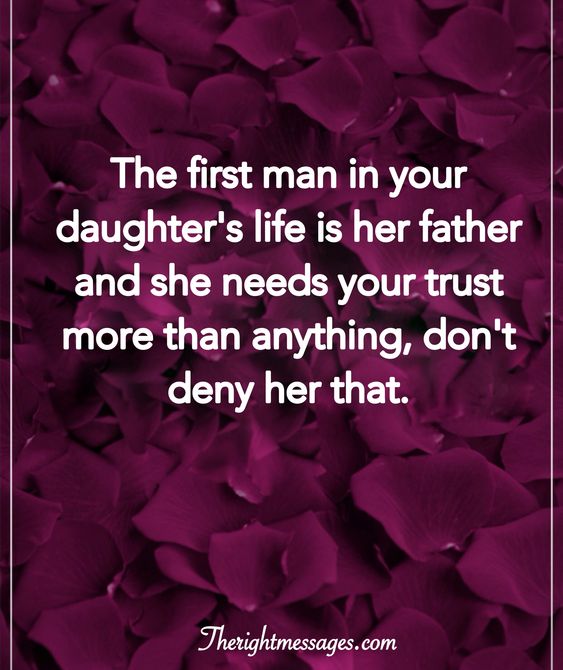 #10: The first place a woman finds her identity is as a daughter, and there’s no worse injustice you can commit against her than to be an absent father. 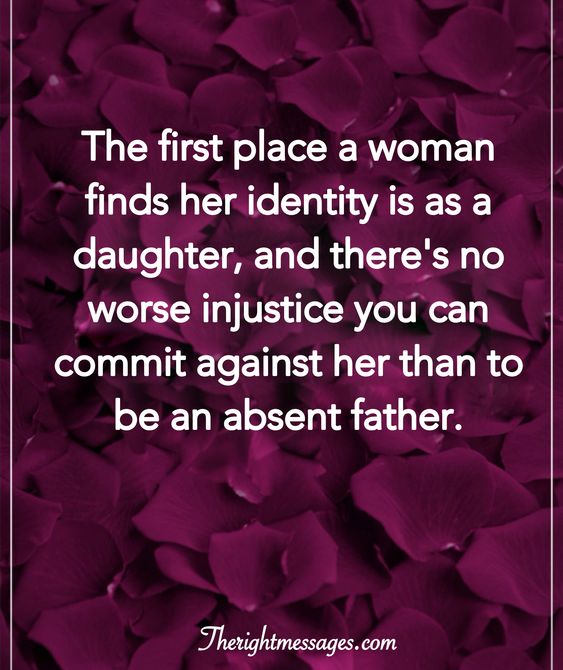 #11: One of the greatest moments between father and daughter is that walk down the aisle, then you see you little baby girl become a woman right before your eyes. 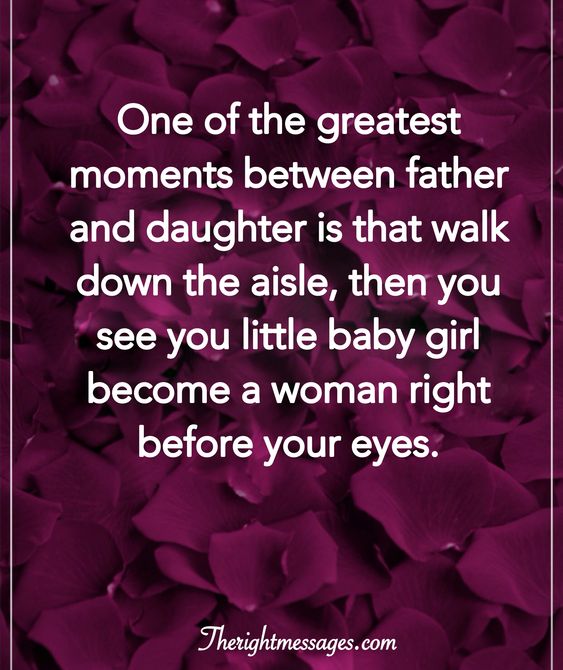 #12: There’s no perfect way to be a father but you can do your best, give your daughter the best of you and protect her so she never doubts your love. 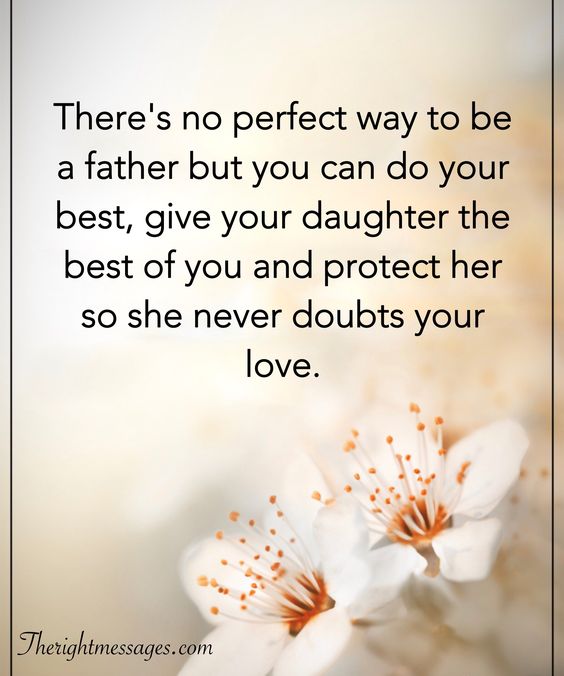 #13: It’s important to make your daughter know that you are not just her father but her confidant, someone who would listen to her without judging or condemning her. 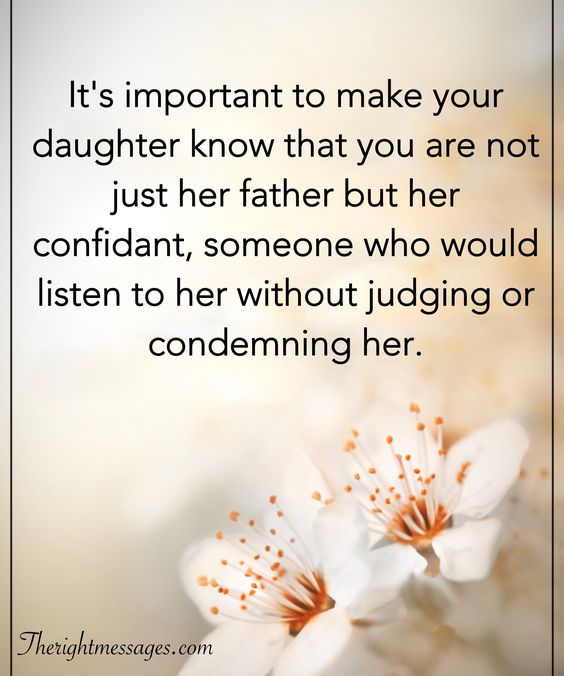 #14: For new fathers, you must know that daughters are a lifetime job right from the delivery room, till you walk them down the aisle. 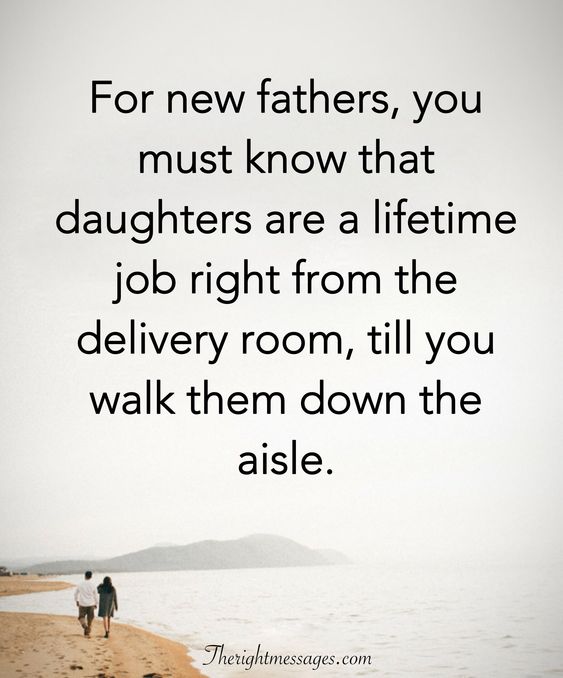 #15: After you see your little girl grow into a lady, you know your job as a father is done and that’s such a fulfilling thing to see. 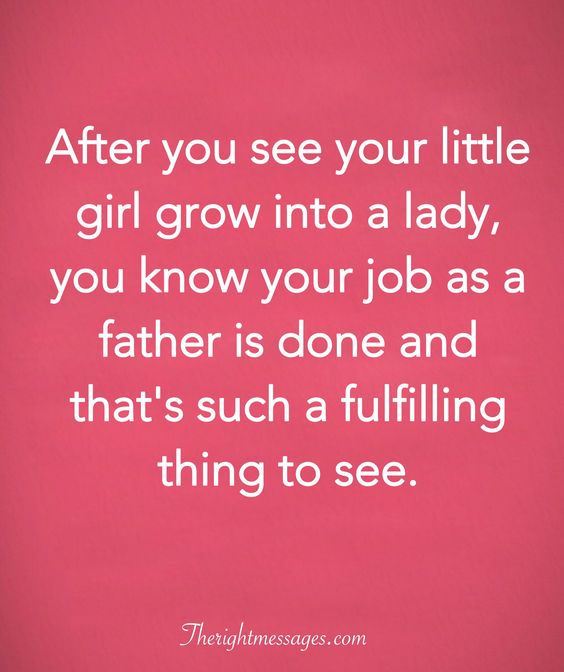 #16: Being the best father to your daughter is just as important as being a great husband to your wife because they are the most important women in a man’s life. 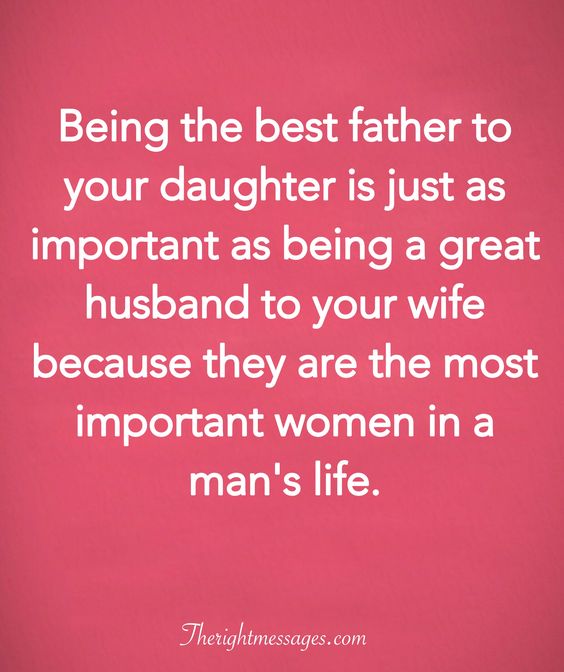 #17: Don’t ever make your daughter feel inadequate by comparing her with your son, being a father includes loving your children irrespective of their gender. 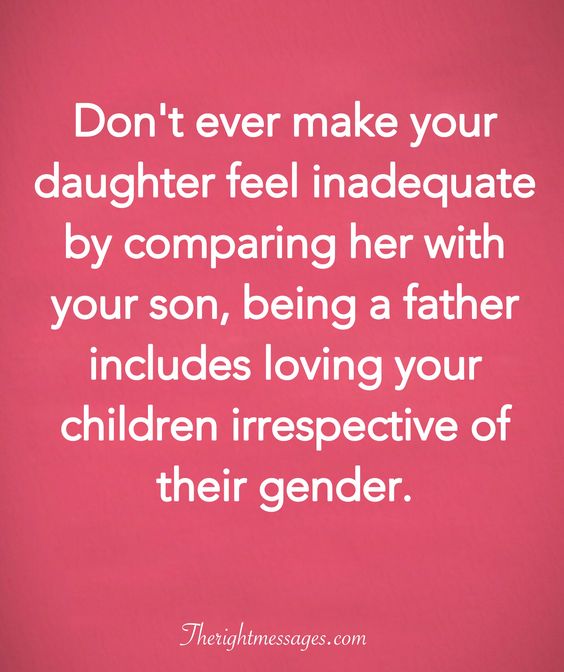 #18: Have you ever thought about how lucky your daughter would be if she could count on you to be her number one fan, her mentor and her confidant? 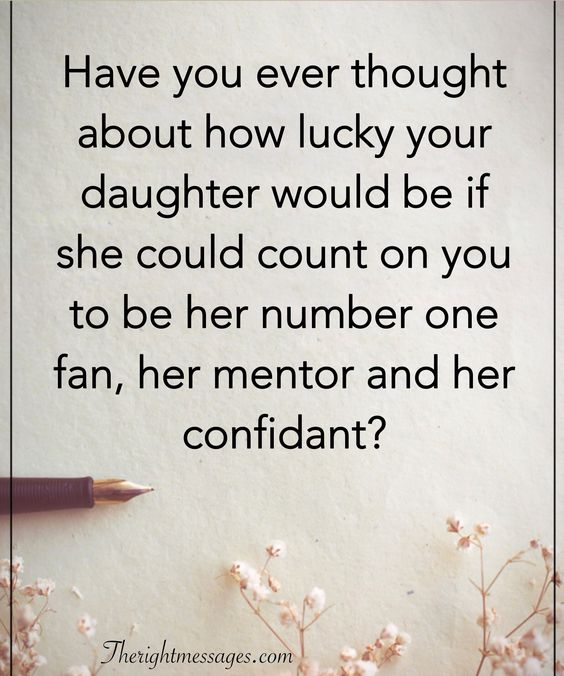 #19: Daughters want to know that they would always make their fathers proud so give your daughter a hug even when she has done the worst. 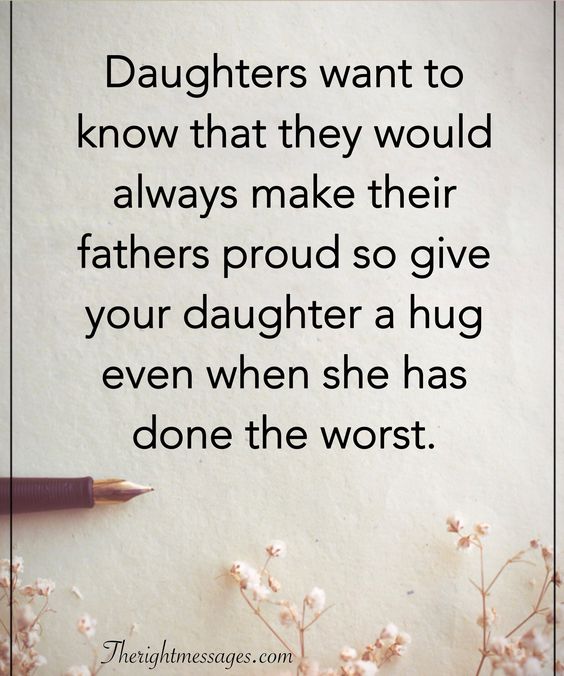 #20: Nothing breaks a girl than losing the trust of the one man she needs to trust her, so fathers must learn to forgive their daughters when they err. 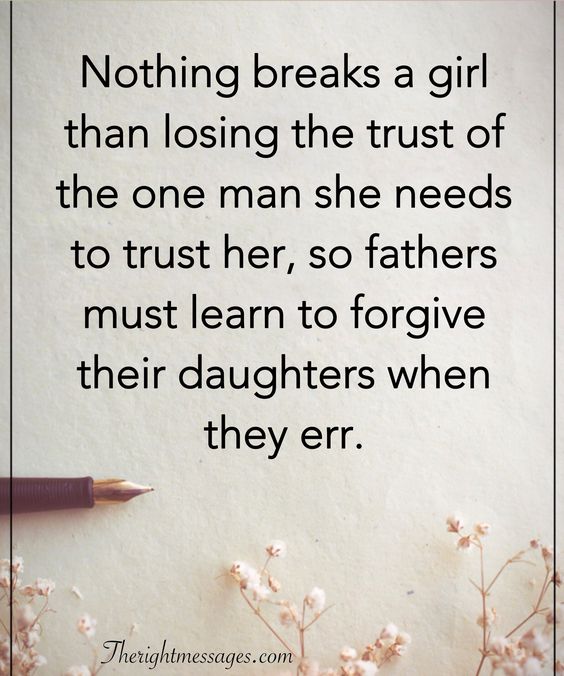 #21: You have raised a strong woman when your daughter is a woman of principle that stands up for herself and for others who are too weak. 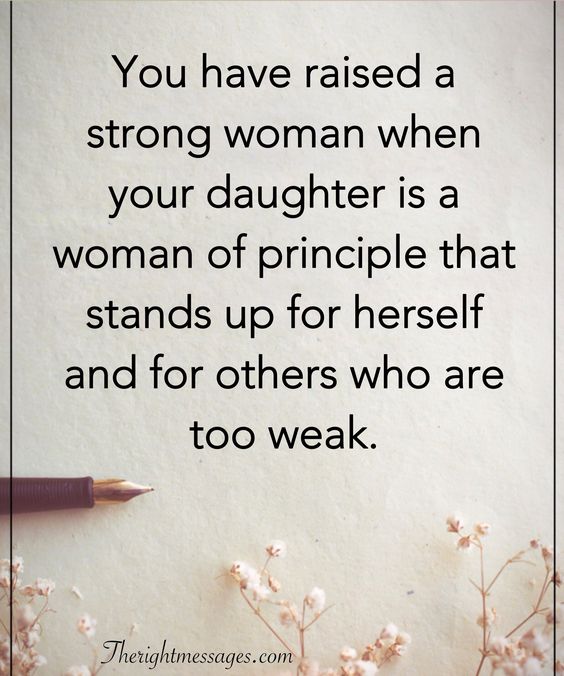 #22: There are moments you would doubt your father skills and you would make mistakes raising your daughter but that’s all family is all about. 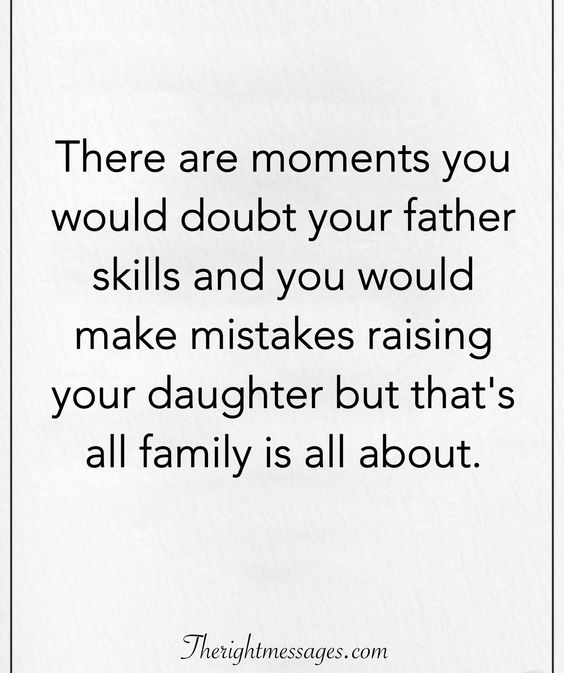 #23: As a father you should teach your daughter that not all men are terrible and she must be willing to open up for a good man who would take care of her just like you do. 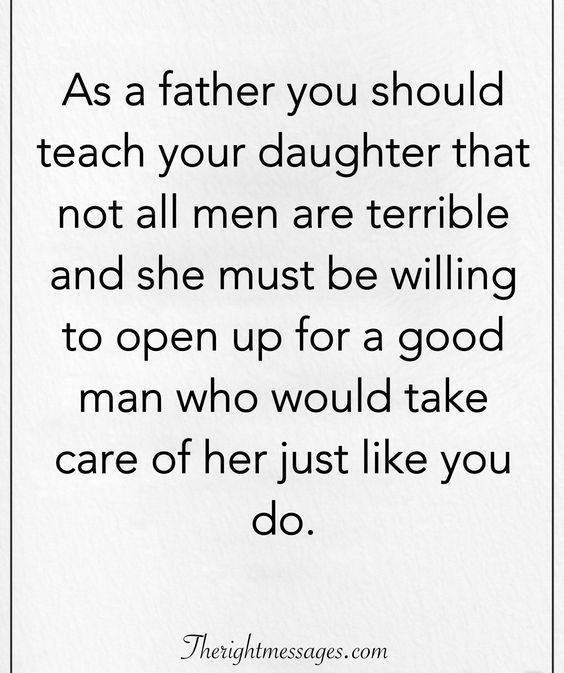 #24: Don’t always expect your daughter to understand that you love her, sometimes all she would see is a grumpy father who doesn’t want her to have fun. 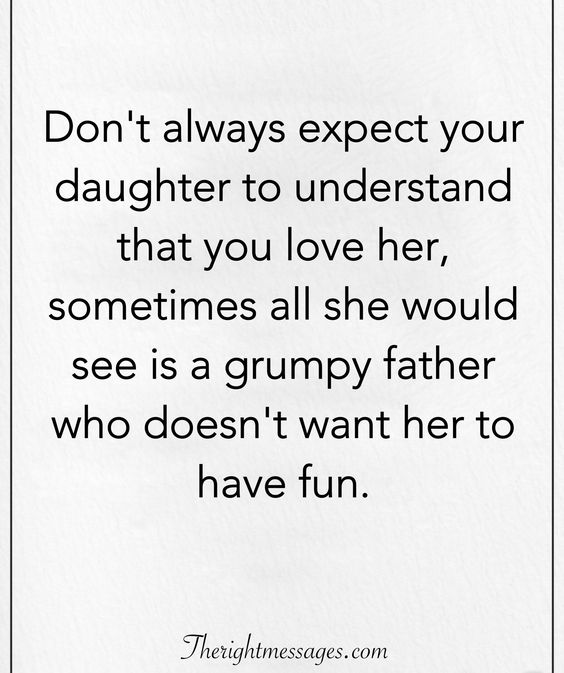 #25: Being a father is never going to be a ride in the park. Half of the time you would be saving your daughter from her own self. 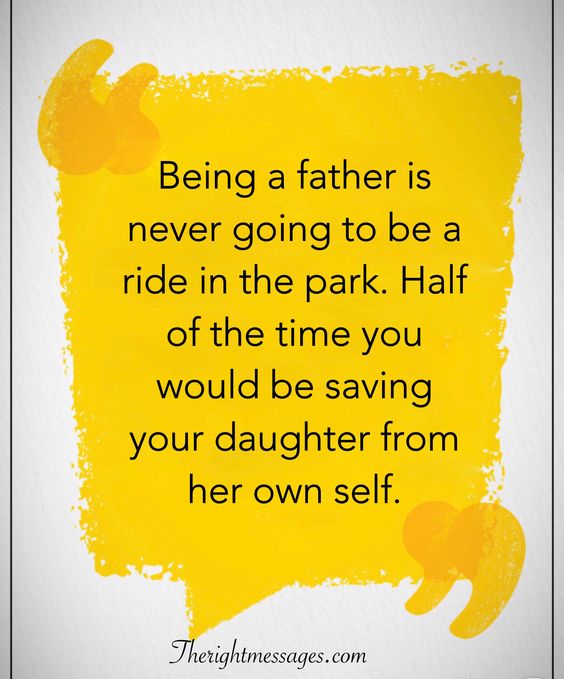 #26: Don’t ever expect your daughter to be on her best behaviour, even when she becomes a mother, you are still her father and must learn to be patient. 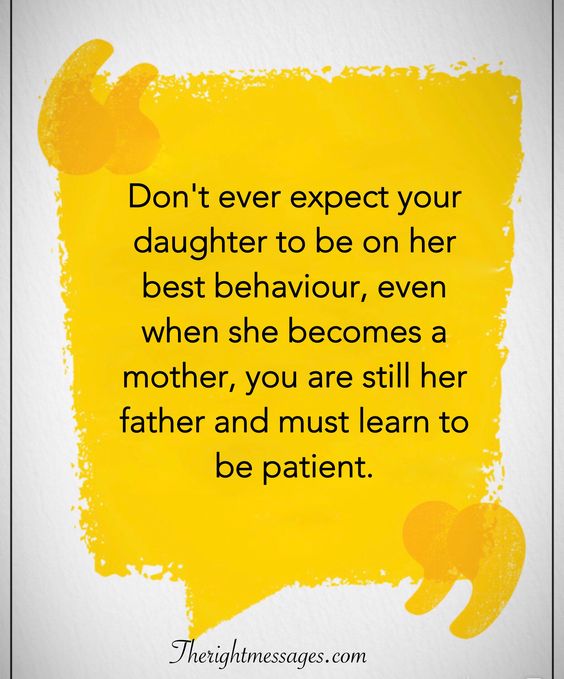 #27: To be the best grandfather, you need to first make your daughter experience a beautiful home which would guide her towards a good man.

#28: Fathers are always on the battlefield against predators, it’s even more of a battle when you have a beautiful daughter. She would always need protecting. 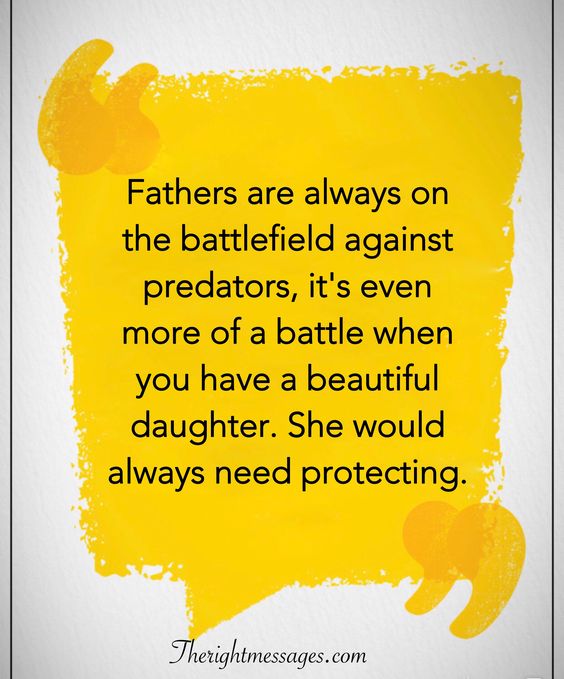 #29: Be kind to your wife, you are showing your daughter what she should expect from the man she loves. 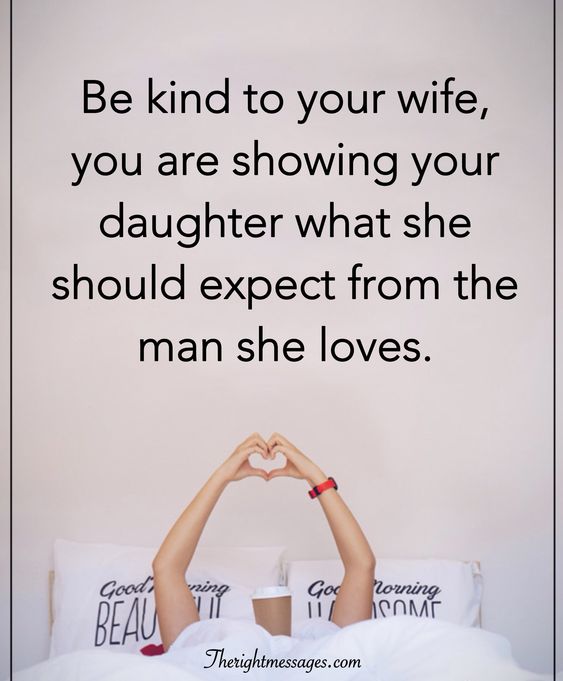 #30: In training your daughter, a father must not neglect his daughter’s emotions because emotions would always be with her every step of the way. 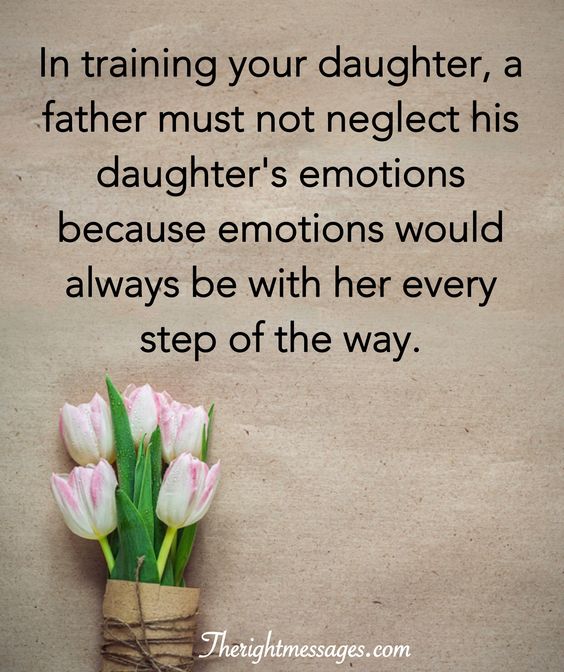 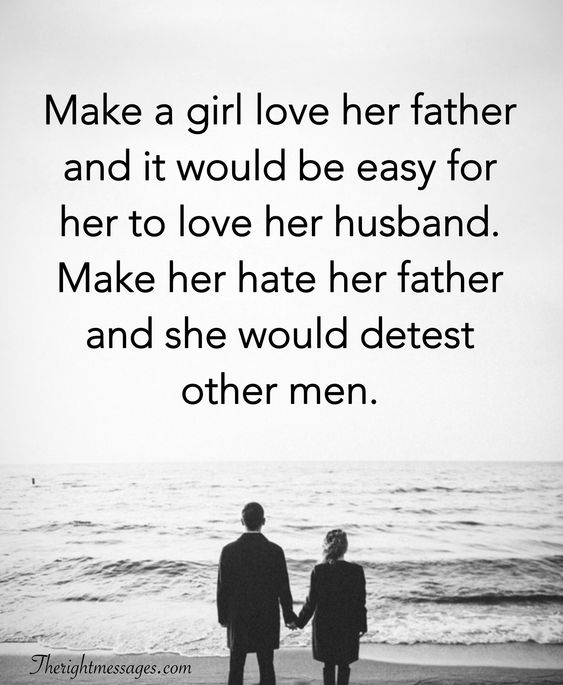 #32: Be the rock she needs, be there when she cries and share in her most exciting moments. This is what fathers do for their daughters. 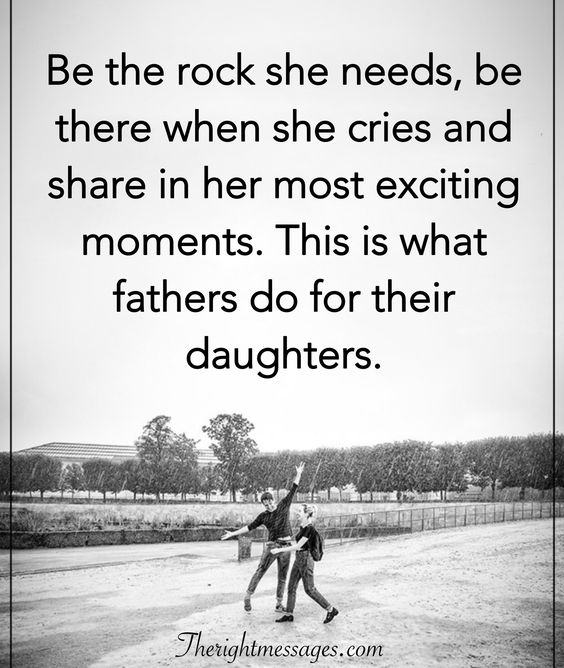 You might not understand her totally, she might not understand you either but that’s what family is all about. People grow and your daughter will grow too, this is why you should start to share some interesting thoughts on your relationship with her. No one should ever have to shy away from a father daughter conversation because they don’t know what to say

Audrey Hepburn is remembered for her memorable movie roles in the 1950s and 60s. But Hepburn was not only an accomplished actress, she was also a great humanitarian who spent the latter part of her life helping underprivileged children and mothers across the globe through UNICEF. Etandoz gets you the most Inspiring Audrey Hepburn Quotes about […]

Wisdom is something that is very hard to achieve, only a few people have it in them to actually utilize their wisdom in something more productive. Do you have wisdom and do you want to share it, if so, then how would you try to share it to the world and so the world can […]